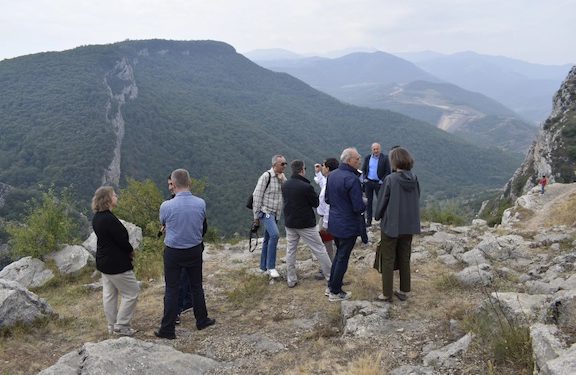 The ambassadors of the United States, Russia and France, representing the co-chairing countries of the OSCE Minsk Group, rejected an invitation by Azerbaijan’s President Ilham Aliyev who organized a junket of foreign diplomats to occupied Shushi over the weekend.

According to Azerbaijani press reports, representatives of 46 countries accredited in Azerbaijan took part in the junket, including the ambassadors of Turkey, Pakistan, Italy, Australia, Sweden, Poland, Israel, Belarus, Ukranie and Greece, as well as representatives of various United Nations-affiliated bodies.

Also on the trip were Azerbaijan’s religious leader Allahshukur Pashazadeh, who along with other religious representatives officiated a service at Shushi Gazanchetsots Cathedral, which was presented to the foreign diplomats as having Russian Orthodox roots.

The absence of the the Russia, American and French diplomats created confusion among the delegation and prompted the Azerbaijani press to label them as “pro-Armenian.”

“The Republic of Armenia considers utterly unacceptable the visit of diplomatic representatives accredited in Azerbaijan to the occupied territories of Artsakh, including Hadrut and a historical center of Artsakh – Shushi: regions which were ethnically cleansed and their population was a subject to war crimes and other mass atrocities committed by Azerbaijani armed forces during the recent aggression,” said the note given to the diplomats by Yerevan.

It was emphasized that by arranging such events the Azerbaijani authorities are trying to legitimize the aggression against the people of Artsakh and to strengthen their own claims of having resolved the conflict by force.

“During all the meetings, it has been underlined that the involvement of diplomatic representatives in such visits contradicts the spirit of cooperation existing between the Republic of Armenia and those countries, as well as to the position of the OSCE Minsk Group Co-Chairmanship. In this regard, Armenia strongly calls for refraining from any actions that may justify the use of force and thereby undermine regional peace and security,” said the Armenian Foreign Ministry.

“The use of force and mass atrocities cannot settle the Nagorno-Karabakh conflict and the resolution of the conflict can be achieved only through negotiations under the auspices of the only internationally mandated format- the OSCE Minsk Group Co-Chairs,” added the Foreign Ministry, which also announced that a similar note was brought to the attention of countries that have non-resident diplomatic missions in Armenia.

Artsakh’s Foreign Ministry also condemned the visit of diplomats to Shushi and in a statement issued on Tuesday said that “Azerbaijan’s attempts to legitimize the current illegal state of affairs also means justifying the unleashing of an aggressive war, cooperation with international terrorists, violations of international humanitarian law and war crimes.”

“To this end, it is regrettable that foreign diplomats accredited in Azerbaijan have succumbed to Baku’s manipulative actions, which are not only aimed at preventing the resumption of the process of a comprehensive settlement of the Azerbaijani-Karabakh conflict, but also undermine the foundations of international relations, laying the basis for recognizing the results of illegal actions as an acceptable norm. No territorial gains that have resulted from the threat or use of force should be recognized as legitimate,” added official Stepanakert.