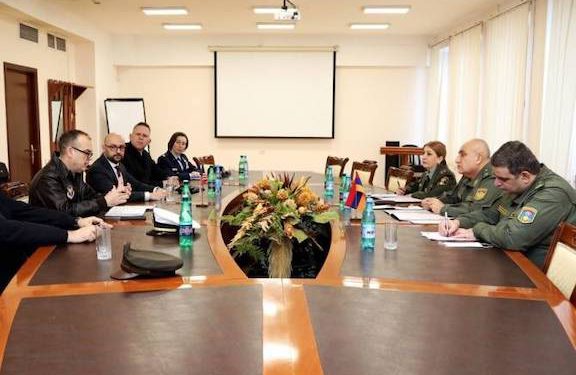 Deputy Defense Minister Arman Sargsyan welcomed the delegation and during a meeting, also attended by U.S. Ambassador to Armenia Lynne Tracey discussed issues related to regional security. The discussion also focused on U.S.-Armenia bilateral cooperation in the field of defense.

Deputy Chief of the General Staff of the Armed Forces of Armenia, Major General Arakel Martikyan also met with the delegation. During the discussions on the Armenian-American military cooperation, Major General Martikyan highlighted the cooperation in the fields of peacekeeping, military health care and education, and suggested making new efforts to develop that cooperation. The U.S. representatives made a number of proposals, including rehabilitation programs for wounded soldiers and the development of emergency response systems, Armenia’s Defense Ministry reported.

The American delegation visited the defense ministry’s peacekeeping brigade and took part in a welcoming ceremony for Armenian peacekeepers who had recently returned from Kosovo.

The delegation also visited the National Defense Research University, as well as the ministry’s Central Clinical Military Hospital, where Tracy and Vaughan presented the U.S.’s donation of $665,000 worth of medical equipment from the U.S. Global Peace Operations Initiative to Armenia’s expeditionary military medical unit.

In her remarks Ambassador Tracy highlighted the courage and dedication of Armenia’s military medical personnel.

“You seek to heal and treat your fellow soldiers and airmen, putting others ahead of yourself.  We hope that this equipment will save and improve many Armenian lives,” said Tracy.

“This equipment will assist the Armenian military in saving lives by providing the best possible medical care to its service members, and it further demonstrates the U.S. engagement with our Armenian partners,” Brigadier General Vaughan stated.

Ankara Says Armenia ‘Content’ with Normalization of Ties with Turkey