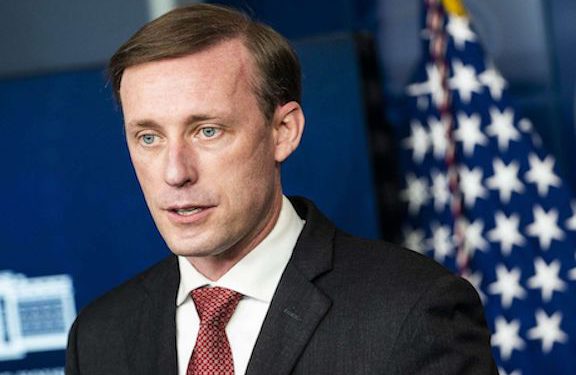 U.S. National Security Advisor Jake Sullivan on Monday said that movements around the Armenia border are “irresponsible and provocative” and called for a peaceful resolution of the standoff in Syunik, which has entered it fifth day after Azerbaijani forces entered the sovereign territory of Armenia in both the Syunik and Gegharkunik provinces.

“The American side deemed the actions of the Azerbaijani forces inside the border of Armenia unacceptable and provocative, and stressed that the U.S. position will be presented to the Azerbaijani leadership as well, with a demand to withdraw its forces from the territory of Armenia,” said a readout of the call released by Pashinyan’s office.

“Sullivan praised the restraint shown by the Armenian side in this situation, and hailed the steps aimed at solving the issues not through military but through diplomacy,” added the statement from Pashinyan’s office.

Reportedly, Sullivan also also expressed concern over Armenian captives being held in Azerbaijan and stressed the need to ensure their return.

According to Horne, the NSA spokesperson, “Sullivan conveyed the commitment of the United States to peace, security, and prosperity in the South Caucasus. He expressed concern over recent tensions between Armenia and Azerbaijan, and emphasized that military movements near un-demarcated borders are irresponsible and provocative.”

“He welcomed the ongoing communication between the two sides and both leaders’ commitment to resolving this issue peacefully.  In addition, he underscored the need for the two countries to conduct formal discussions to demarcate their international border. Finally, he conveyed the commitment of the United States to achieving regional reconciliation through bilateral engagement and as a Minsk Group Co-Chair,” added Horne in a statement.

On Sunday, Secretary of State Antony Blinken spoke with French Foreign Minister Jean-Yves Le Drian “about their cooperation as OSCE Minsk Group Co-Chair Countries and emphasized the need for a long-term political settlement to the Nagorno-Karabakh conflict,” according to a State Department statement.

“France is following the situation with the greatest attention and calls on the parties to continue their discussions in order to achieve the immediate withdrawal of Azerbaijani forces from Armenian territory,” the French Foreign Ministry said in a statement following Le Drian’s call with Aivazyan and Azerbaijan’s Foreign Minister Jeyhun Bayramov.

Le Drian reiterated France’s “great concern” and its commitment to the preservation of the territorial integrity of Armenia.

According to France’s foreign ministry, Le Drian also discussed the return of Armenian POWs by Azerbaijan and renewed its appeal “for direct and high-level dialogue between the parties, under the auspices of the Co-Chairs, in order to discuss all the issues with a view to reaching a comprehensive agreement guaranteeing security and lasting peace in the region.”