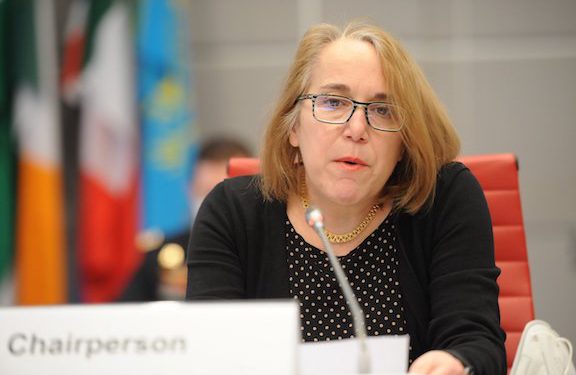 The United States believes that there is an urgent need for a comprehensive and long-term political settlement to the Nagorno Karabakh conflict. This view was conveyed by Secretary of State Antony Blinken during his meeting with Russia’s Foreign Minister Sergei Lavrov on Wednesday and was echoed by U.S. Chargé d’Affaires Courtney Austrian during the OSCE Permanent Council on Friday.

“In our national capacity, the United States recalls the April 13 Minsk Group Co-Chairs’ statement underscoring their readiness to assist the sides in resolving remaining areas of concern through high-level negotiations. These include issues related to, inter alia: the return of all Prisoners of War and other detainees, the exchange of all data necessary to conduct effective de-mining of conflict regions; the lifting of restrictions on access to Nagorno Karabakh, including for representatives of international humanitarian organizations; the preservation and protection of religious and cultural heritage; and the fostering of direct contacts and co-operation between communities affected by the conflict as well as other people-to-people confidence building measures,” Austrian said.

“We urge the sides to return to substantive high-level negotiations, without preconditions, under the auspices of the Minsk Group Co-Chairs as soon as possible.  The continued and urgent need for a comprehensive and long-term political settlement to the Nagorno Karabakh conflict is clear.   We urge both sides to avoid fueling hatred through escalatory or dehumanizing rhetoric.  We also urge both sides to investigate alleged human rights violations or violations of international humanitarian law, and to hold accountable those found responsible,” she added.

“In light of recent developments, the United States also notes that movements in areas where borders are not fully demarcated at a time of tension are irresponsible and unnecessarily provocative.  We call on the sides to commit immediately to a process of discussion and negotiation to resolve their differences, and not to resort to unilateral and aggressive actions in the future,” the U.S. envoy said.

Artsakh’s De-Occupation and Status Must be Priorities, Says Foreign Ministry