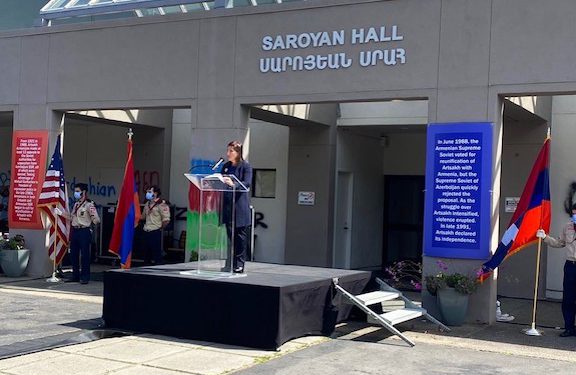 A discussion between California business leaders, the state’s Lieutenant Governor, and Turkish business leaders has been cancelled following reports that two participants were vehement deniers of the Armenian Genocide, The Sun reported on Friday.

According to The Sun, a San Joaquin Valley-based publication, the event, organized by the U.S. Chamber of Commerce as part of its U.S.-Turkish Business Council, was set to feature a keynote address from Lt. Governor Eleni Kounalakis and a presentation from the state’s economic development department before a panel discussion.

Turkish Chamber official Ayhan Zeytinoğlu and Turkisk Orange County businessman Ergun Kirlikovali were also on the agenda. The Sun was the first to report on the statements made by
Zeytinoğlu and Kirlikovali denying the Genocide.

In a statement on Friday, Kounalakis’ spokeswoman said that the lieutenant governor, along with California GO-Biz officials, and all other California business leaders participating on the panel had withdrawn from the event, forcing a cancellation.

In a statement issued to The Sun, Kounalakis said participation ran counter to the state’s values relative to human rights issues.

“I was deeply disturbed to hear that the upcoming U.S.-Turkish Business Council meeting would feature panelists who are Armenian Genocide deniers,” Kounalakis said. “Now and always, California stands strong on the side of truth and justice for this still-unpunished crime.”

“In line with congressional resolutions specifically rejecting attempts to deny the Armenian Genocide, along with California’s long-standing policy calling for justice for this unpunished crime, we alerted Lt. Gov. Eleni Kounalakis to the fact that prominent Genocide deniers had been added as panelists to this event. We are grateful for her swift and decisive action withdrawing State participation, canceling the event and preventing denialists from having this public forum,” said Nora Hovsepian, chair of the Armenian National Committee of America-Western Region board of directors.

Aram I Asks Pope to Assist in Release of Armenian POWs