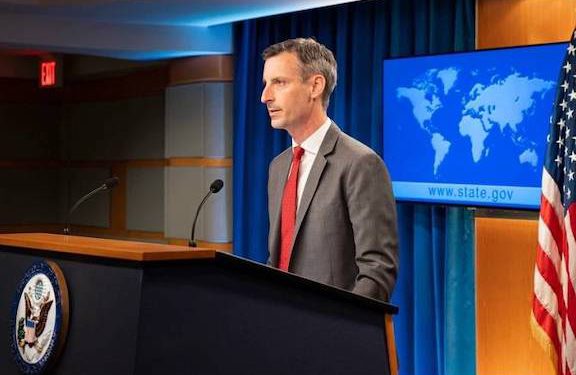 YEREVAN (Azatutyun.am)—The United States has condemned the latest deadly skirmishes on the Armenian-Azerbaijani border and called on Armenia and Azerbaijan to take “immediate steps to de-escalate the situation.”

“The United States condemns the recent escalation of violence along the international border between Armenia and Azerbaijan,” the State Department spokesman, Ned Price, said in a statement issued on Wednesday after three Armenian soldiers were killed in border clashes with Azerbaijani troops.

Philip Reeker, the acting U.S. assistant secretary of state for European and Eurasian affairs, expressed concern at the deadly fighting in a phone call with Azerbaijani Foreign Minister Jeyhun Bayramov. The latter blamed Armenia for the escalation.

The Armenian military says that the fighting broke out when Azerbaijani troops tried to capture one of its border outposts in Armenia’s northeastern Gegharkunik province.

Tensions in Gegharkunik’s border zone steadily increased over the past week. The U.S. ambassador to Armenia, Lynne Tracy, visited the mountainous area on Monday.

“Continued tensions along the Armenia-Azerbaijan border underscore the fact that only a comprehensive resolution that addresses all outstanding issues can normalize relations between the two countries and allow the people of the region to live together peacefully,” said Price.

He said Baku and Yerevan should “return as soon as possible to substantive discussions under the auspices of the OSCE Minsk Group Co-Chairs to achieve a long-term political settlement to the conflict.”

In a joint statement released in April, the U.S., Russian and French mediators co-heading the Minsk Group likewise called for renewed talks on a “comprehensive and sustainable” resolution of the Karabakh conflict based on their pre-war peace proposals.