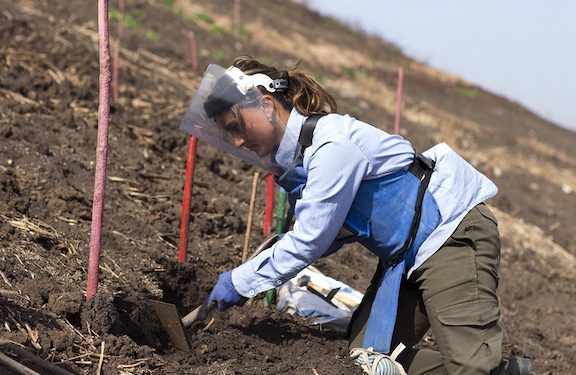 A woman is de-mining in Artsakh

The United Kingdom has provided 500,000 (about $691,000) pounds to help clear landmines in and around Nagorno-Karabakh, to make the area safe, prevent injuries and save lives following last year’s conflict.

The funds given to the United Nations Development Program will help with training and personnel to support mine clearance and make contaminated land safe for human use in and around Nagorno-Karabakh.

“As a leading force for good in the region, the UK was the first country to announce humanitarian support following the 2020 Nagorno-Karabakh conflict, with £1 million donated to the International Committee of the Red Cross to support those affected,” said a statement issued by the UK government.

In video message released by the UK Embassy in Armenia, the country’s ambassador, John Gallagher, outlined his country’s contribution to supporting mine action in areas in and around Nagorno Karabakh.

Gallagher said that the “impact of the Nagorno Karabakh conflict, particularly the loss of life and livelihoods, has been devastating for the region.”

Now the UK is calling on other countries to support the UN initiative to help thousands of people affected by the conflict to rebuild their lives and return to the region after being driven from their homes by conflict or unexploded munitions.

“The territories in and around Nagorno-Karabakh are amongst some of the most heavily mined in the world, with frequent reports of civilians losing their lives or suffering life-changing injuries,” Minister for European Neighborhood and the Americas, Wendy Morton said.

“The UK’s donation will be used to harness the UN’s expertise and reduce the risk to civilian life in both Armenia and Azerbaijan through the provision of training and technical de-mining support to those helping make the area safer. But there’s more work to be done. That’s why we’re calling on our international partners to also support the collective effort needed if we are to ensure the safety of all people in the region,” added Morton.

The funding will be used by the UN to deliver support with local and national de-mining organizations in Armenia and Azerbaijan including through technical, strategic and management support.

A significant number of landmines and unexploded ordnance remains across the region which poses an indiscriminate threat to life. The UK continues to encourage both Armenia and Azerbaijan to commit to sign the Ottawa Treaty that seeks to eliminate the use of landmines around the world.