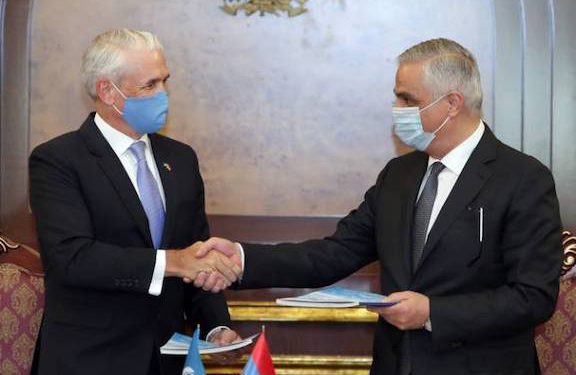 Armenia and the United Nations this week signed a sustainable development partnership agreement, which may yield $230 million for Armenia through various UN agencies. The document is said to define the efforts all UN institutions in Armenia for the next five years.

The agreement, developed on the basis of national development priorities, summarizes the collective offer of 20 resident and non-resident UN agencies to the country, through which the UN will provide $230 million in financial assistance “for the benefit of the Armenian people,” according to the document.

In his welcoming remarks, Grigoryan stressed that all the directions and spheres mentioned in the document have a crucial role for Armenia, saying he believes that with the agreement Armenia “will further unite our efforts for implementing the UN 2030 Sustainable Development Agenda.’’

“The Partnership Framework is a new important guideline for the already deep cooperation between the Republic of Armenia the United Nations,” the UN’s Sharp said.

“This agreement sets out the ambitious, collective vision of all UN agencies in Armenia, which aims to improve people’s well-being and opportunities, to promote ‘green’ economic reforms, to strengthen an effective governance system, to promote gender equality without neglecting anyone,” added Sharp.

Council of Europe Chief Urges Yerevan and Baku to Negotiate