US Ambassador to Armenia Visits Gegharkunik 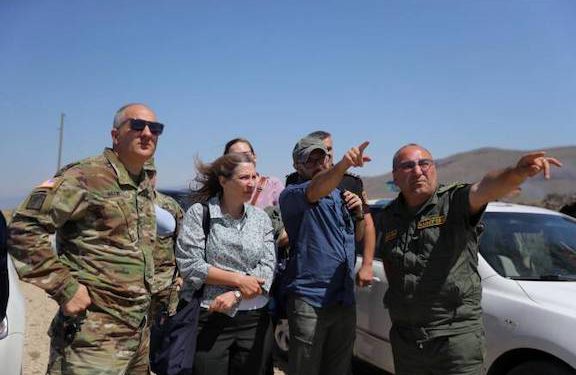 U.S. Ambassador to Armenia Lynne Tracy is being briefed by Armenian military officials in the Gegharkunik Province on July 26

United States Ambassador to Armenia Lynne Tracy visited the Gegharkunik Province to assess the situation on the ground, specifically in the Upper Shorja section of the border, where a few days ago an Armenian soldier was killed as a result of Azerbaijani gunfire.

The Gegharkunik and Syunik provinces are the epicenter of a border standoff, which has been escalating since May 12, when Azerbaijani forces breached Armenia’s sovereign border and advanced their positions, amassing some 1,000 troops with Armenia’s territory, according to official sources.

Tracy was accompanied by representatives of Armenia’s Defense Ministry. She received a briefing about the situation in Upper Shorja by the commander of the military unit, Major General Arayik Harutyunyan.

The ambassador reiterate the State Department’s concerns about incidents along the Armenian-Azerbaijani border, stressing that the U.S. rejects the use of force in the event of a demarcation.

Tracy also stressed that the U.S., as a co-chair of the OSCE Minsk Group, remains deeply committed to working with all parties to achieve a lasting political solution to the Nagorno-Karabakh conflict. At the same time, she urged the parties to return to the negotiating table under the auspices of the Minsk Group co-chairs.

Azerbaijanis Fire at Armenian Positions in Gegharkunik and Ararat Provinces