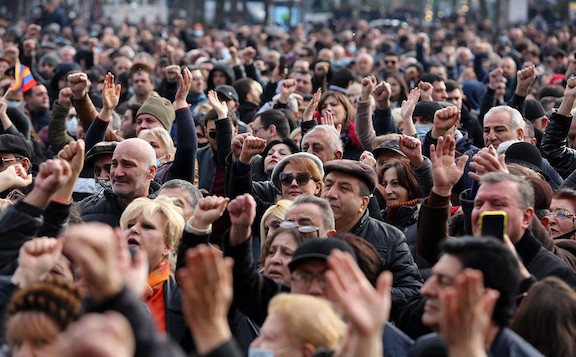 International calls for restraint and calm in the wake of Armenia’s military brass demanding Prime Minister Nikol Pashinyan’s resignation continued throughout Thursday with the United States, the European Union, NATO as well as the OSCE weighing in on the matter.

The State Department on Thursday afternoon called for restrain and respect for rule of law.

“We urge all parties to exercise restraint and to avoid any escalatory or violent actions. We remind all parties of the bedrock democratic principle that state’s armed forces should not intervene in domestic politics,” said State Department spokesperson Ned Price in comments to the press, which were posted on the department’s official Twitter account.

Earlier in the day, the U.S. Embassy in Armenia said it was attentively following the developments in Armenia, “including the announcements of the stakeholders.”

‘’We encourage all the parties to demonstrate tranquility, restraint and bring down the tensions peacefully and without violence,” said a statement by the embassy, which also emphasized the importance of democratic institutions and processes for solving political disagreements through dialogue.

The European Union called on all sides to show restraint.

“Political differences must be resolved peacefully and in strict adherence to the principles and processes of parliamentary democracy. In line with the Armenian Constitution, the armed forces ‘shall maintain neutrality in political matters and shall be under civilian control,'” said European Commission spokesperson Peter Stano said on Thursday.

The EU also stressed the need for maintaining the democratic and constitutional order as “the only way Armenia can effectively tackle the challenges it is confronted with.”

NATO encouraged democracy in Armenia on Thursday amid growing tension between the military and prime minister.

“We are closely monitoring developments in our partner country Armenia. It’s important to avoid words or actions that could lead to further escalation,” NATO spokesperson Oana Lungescu said on Twitter.

“Any political differences should be resolved peacefully & democratically and in line with Armenia’s constitution,” she added.

The OSCE Chairperson-in-Office, Sweden’s Foreign Minister Ann Linde expressed concern about the developments in Armenia, according to a post on her Twitter page.

“I am concerned with the latest developments in Armenia. I urge all parties to act peacefully in respect of the OSCE commitments on democratic processes and the rule of law. The situation must be resolved without violence,’’ she wrote.

…And Ankara is ‘Concerned’ about Democracy!