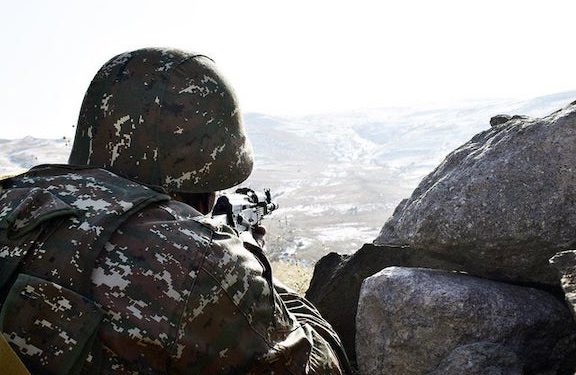 A soldier of Armenia's Armed Forces

Azerbaijani attacks on Armenia’s Yeraskh border region continued on Monday this time using mortars, grenade launcher and other caliber of arms to shell the city.

According to Armenia’s Defense Ministry, beginning at 6:40 p.m. local time on Monday shelled Yeraskh, resulting in heavy skirmishes along the border. As of 11 p.m. on Monday, tensions remained high.

The Defense Ministry waned that border provocations “will receive a harsh response and all responsibility for further aggravation the situation will fall on the military-political leadership of Azerbaijan.

Monday’s shelling following similar actions by the Azerbaijani forces, which on Saturday opened fire on Yeraskh position at 1:30 p.m. local time, according to the Defense Ministry.

On Wednesday, 38-year-old Armenian soldier Samvel Alaverdyan was killed by Azerbaijani forces there.