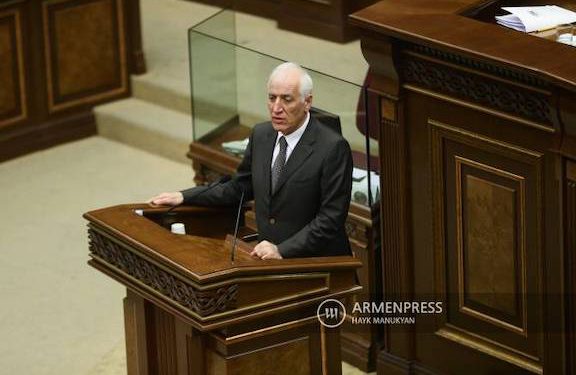 YEREVAN (Azatutyun.am)—In a vote boycotted by its two opposition factions, the Armenian parliament elected on Thursday Minister of High-Technology Industry Vahagn Khachatryan as the new president of the republic.

Khachatryan, who was nominated for the post by the ruling Civil Contract party, will have largely ceremonial powers, just like his predecessor Armen Sarkissian. The latter unexpectedly resigned in late January, saying that during his nearly four-year presidency he has lacked “necessary tools to influence” political and socioeconomic developments in Armenia.

Khachatryan, 62, is an economist who had served as mayor of Yerevan from 1992-1996 during former President Levon Ter-Petrosian’s rule. He was a staunch political ally of Ter-Petrosian until agreeing to join Prime Minister Nikol Pashinyan’s government last August.

The parliament controlled by Civil Contract needed two rounds of voting to elect Khachatryan for a seven-year term. His candidacy was backed by 71 members of the 107-seat National Assembly in the second round.
The opposition Hayastan and Pativ Unem alliances decided last month not to field their own presidential candidate, saying that they do not want to “legitimize” the process. In a joint statement, they said that Khachatryan is a partisan figure who does not correspond to constitutional provisions requiring the presidency to be a “really neutral institution consolidating the society.”

All parliament deputies representing the two blocs boycotted both secret ballots. Hayastan’s parliamentary leader, Seyran Ohanian, insisted on Wednesday that the new president will be “an appendage to the executive branch.”

Addressing the National Assembly before the votes, Khachatryan made clear that he will be helping the Armenian government implement its domestic and foreign policies. He specifically voiced support for the government’s conciliatory policy towards Azerbaijan and Turkey.

“We need to live in peace with our neighbors,” he said.

Khachatryan stated at the same time that he will strive to represent not only Pashinyan’s political team and ordinary supporters but also other strata of the Armenian society. “I’m sure that you don’t want me to be only your president,” he told pro-government lawmakers.

Pashinyan said earlier that the new president must be in sync with his administration. He said there was a lack of such “political harmony” a year ago when the Armenian army top brass demanded his resignation over his handling of the 2020 war in Nagorno-Karabakh.

Pashinyan seemed to refer to former President Sarkissian’s reluctance to quickly rubber-stamp his decision to fire the country’s top general.

The prime minister was quick to congratulate Khachatryan on becoming president. He noted that Khachatryan is taking office at a time when Armenia is going through a “difficult period of regional and international challenges.”