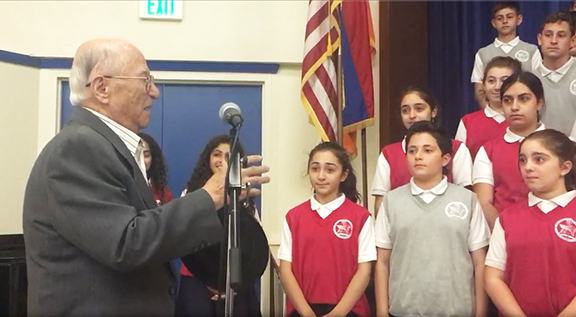 Vahan Chamlian with Chamlian students during a visit in 2016

Vahan Chamlian, who along with his wife Anoush, were the benefactors of an Armenian school in Glendale that bears their name, passed away on Thursday in Fresno. He was 96.

Vahan Chamlian, who rose from poverty to become one of the most successful businessmen in America, dedicated his life to advancing the Armenian community and the Armenian Nation. However, his most important legacy will remain the Vahan and Anoush Chamlian Armenian School, which since 1975 has educated thousands of Armenian students, who have grown to become successful community leaders and stalwarts in business, medicine, law and other fields.

Vahan Chamlian was born in Lebanon in 1926 and emigrated to the United States in 1957. Legend has it that he arrived in America with only $20 in his pocket, but would work hard to become the world’s largest dealer in second hand clothing via his company Chamlian Enterprises.

“My philosophy has been to build my personal life such that I can help my nation and humanity,” Vahan Chamlian told Asbarez in an interview in 2018. He said his national spirit was instilled in him by his family and was developed through attending Armenian school.

“When I was six years old, the boys in our neighborhood were cub scouts. They took me in their ranks and I late became a boy scout and thus my ties with my Nation were strengthened,” recounted Chamlian to Asbarez.

“You can never forget your national identity, because then you will have no identity to speak of,” Chamlian added with conviction. “The best thing in life is to be able to help, especially your nation.”

It was this commitment to education and the advancement of the Armenian Cause that promoted Vahan and Anoush Chamlian in a school that carries their name, and since 1975, serve the community by offering stellar education to children from kindergarten through eighth grade.

He recounted to Asbarez in 2018 that one day he visited his friend Garo Haddad who had also invited the then Western Prelate Archbishop Yeprem Tabakian and long-time community leader Stepan Kabadayan, who proposed that Chamlian sponsor a classroom in the school, which was operating in a rented facility at the time. There, Haddad told him that he should sponsor not just one classroom but the entire school. Chamlian liked that proposal and went about purchasing the land and building what is now one of the preeminent Armenian schools in Southern California.

He was awarded the “Prince of Cilicia” medal in 1983 by then Catholicos of the Great House of Cilicia, Karekin II.

For decades, Vahan and Anoush Chamlian have also been staunch supporters of Asbarez and its mission to inform and provide an arena for the Armenian community since 1908.

The Board of Directors of the Armenian Media Network, the editors, staff and management of Asbarez newspaper offer their condolences to Vahan Chamlian’s wife, Anoush, their two daughters and grandchildren.