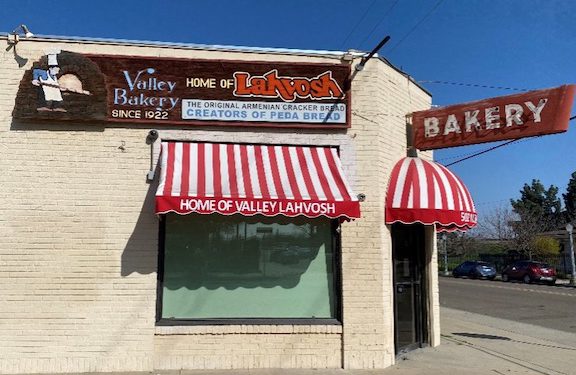 The current Valley Lahvosh retail store on the corner of M and Santa Clara is still open on Fridays from 8:30 a.m. to 4 p.m.

Agnes’ grandmother, Gazair Saghatelian, established the bakery in Downtown Fresno in 1922, after migrating from historic Armenia—specifically Moush. As the company celebrates a century of accomplishments, Agnes described the evolution of the family business that she took over in 1993 from her mother, Janet, after graduating with a B.S. degree in Business-Management from California State University, Fresno.

After being introduced to the audience by Van Der Mugrdechian and Dr. Matthew Ari Jendian, Agnes described how the company’s original name changed from California Baking Company to Valley Bakery in the 1940s and was rebranded in 1994 as Valley Lahvosh Baking Company.

The original retail store, on the corner of M and Santa Clara, is still open for sales on Fridays from 8:30 a.m. to 4 p.m., and if you arrive when they open, you will smell the wonderful aroma of fresh-baked Armenian peda bread. Individuals can sign up for tours and learn more about events by visiting Valley Lahvosh Baking Co.’s Facebook page.

1. A collage of photos of Saghatelian family members

2. In the mid 1940s Gazair Saghatelian passed away and her son, Sam Saghatelian, took over the business. Sam changed the company name to Valley Bakery

4. Janet and Agnes in January 1983, when the heart cutter was delivered and the first batch of heart shaped Lahvosh was produced

5. A black and white photo of Valley Lahvosh, which was originally known as California Baking Co., in Downtown Fresno

Following a Q&A session, a poem titled “Midnight Mix,” written by Amy London after participating in a 100th Anniversary tour, was read by Dr. Jendian. Below is the poem.

Dough.
Almost want to leave it here.
Delicious.
Continuing, though.
Details.
Peda or lahvosh.
You pick.
Or both.
Maybe a special naan?
Valley Lahvosh Baking Company.
Steps of formation.
Delightful.
Midnight mixing – a four-hour proof; the incubation period.
Difficult…
…to wait.
The dough resting and rising like something being created and coming alive.
Imagine… mixing, racks, proofer, oven, cool, sit, package, shelf.
8:30am ready for sale!
Back to the baking, though… and the dough.
Pulling of it, sticking to a finger, a perfect sweet and sour.
Fulminating all senses of a watering mouth.
An aroma of flour, water, sugar, oil, yeast – all-ingredient – inhaled, heated, harmonic perfection!
Decadence.
And some crunch.
Hearts, stars, trees, original round.
Is there any hummus to be found?
Or banir… hiding.
Dinner.
Because of Gazair.
In Old Armenian Town at Santa Clara and M.
A family tradition began.
Since 1922, Valley Lahvosh shipping shapes (and more) to over 40 states.
Famously furnishing Fresnans with fresh, handmade peda on Fridays.
Do not hesitate.
A human heart brushed cracker.
Wonderful women.
Janet to Agnes.
An intergenerational beautiful, booming business.
Hoping beginning with dough happiness continuously happens.
And onto…
…Danielle.
A Saghatelian
…Dynasty!
The Valley Lahvosh Baking Company 100th Year Anniversary.

Amy London, M.A. is a professor/writer/poet and mother of three children and three cats.  She is employed as an adjunct professor of sociology at State Center Community College District, College of the Sequoias, and Bakersfield College and posts poetry periodically on social media.  This poem, “Midnight Mix,” was inspired during Amy’s participation in a 100th Anniversary Tour of Valley Lahvosh Baking Company, led by Agnes Saghatelian on August 25.

What Does Christmas Tell Us?