‘We are Ready to Teach Them Another Lesson.’ Aliyev Threatens War 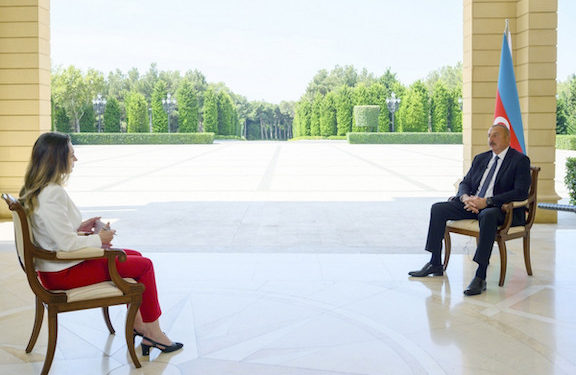 “It seems that the second Karabakh war has not been a lesson for everyone yet. If this is the case, then we are ready to teach them another lesson,” Azerbaijan’s President Ilham Aliyev said during an interview on Saturday with CNN Turk, essentially threatening war against Armenia.

“A few days ago, during a meeting with the Armenian defense minister, the Russian defense minister said that the process of sending Russian weapons to Armenia had begun. This is a very alarming issue. Also, Armenia’s new minister of defense made very irresponsible statements that if the Azerbaijani side trespassed the Armenian border by one centimeter, then they would open fire,” Aliyev said before issuing his threat while expressing his disappointment with Russia for delivering weapons to Armenia.

Aliyev, once again criticized the OSCE Minsk Group co-chairs, repeating his claims that the international mediators efforts to find a settlement for the Karabakh conflict was worthless, prompting him to orchestrate the 44-day war and “liberate our native lands from occupiers at any cost.”

“Unfortunately, for 30 years, the Minsk Group did not come close to resolving this issue. There was some activity, but there was no result in the end. The result was zero and the hopes of the Azerbaijani people were completely dashed,” said Aliyev accusing the international mediators of deliberately “freezing” the conflict.

Azerbaijan’s leader also brought up the so-called “Zangezur Corridor,” which he has proposed several times touting it as a means to ensure economic prosperity in the region.

Aliyev said that the so-called “Zengezur Corridore” “will usher new opportunities for us. At the same time, Azerbaijan will be connected to the Nakhchivan Autonomous Republic, which is an integral part of it, by rail. We also demand that a highway be built – in the Mehri region of Western Zangazur, which is under Armenian control. This is absolutely necessary.”