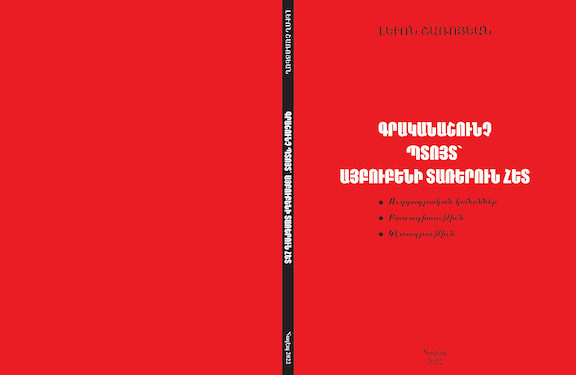 PARAMUS, N. J.—The Armenian Missionary Association of America announced that, with its encouragement and sponsorship, a Western Armenian orthography and punctuation guidebook has been published in Aleppo, Syria.

The newly printed volume, which is 156 pages, is titled “A Literary Inspired Stroll with the Letters of the Alphabet.” The author of the book is renowned Aleppo-Armenian writer, press contributor, and pedagogic tiller Levon Sharoyan.

By its nature, the volume, though it can be considered primarily a grammatical work, has been written in an accessible language and can be read like a perusal volume, for any Armenian-born who desires to improve the mastery of his mother tongue and get acquainted with the rules of her orthography. However, it will be useful specifically to the Armenian teachers of the diaspora, students of the upper grades, and scholars of Armenological institutes.

The Prologue to the volume is signed by renowned Lebanese-Armenian Dr. Armenak Yeghiayan. He observes that, “…[A]t first glance the present compilation seems to be a guidebook of the frequently encountered and seemingly unsurmountable errors of Western-Armenian, but scarcely a few pages deep, the reader realizes, that besides acquiring an important orthographic fact, s/he has become aware also of numerous literary, historical, cultural tidbits, which s/he would have hardly had the opportunity to meet thus selectively and simultaneously gathered together, and at every step will be recompensed by a beautiful finding and a smart proposition.”

Author of the book, Sharoyan, in his foreword, explains, that he undertook this task because during his long years of pedagogic activity he has always painfully realized that candidates of graduation in the higher grades of Armenian secondary schools, by overwhelming majority, were unable to write their mother tongue in perfect orthography.

Starting exactly from this point of departure, Sharoyan undertook the preparation of this project. He skillfully fixated on 21 letters in the Armenian alphabet, for the orthographic complications they caused. The score of letters, taken pair by pair, are those letters in the alphabet that within the orthographic system are homophonotous — of the consonants: Բ-Փ, Գ-Ք, Դ-Թ, Հ-Յ, Ձ-Ց, Չ-Ջ, Ռ-Ր, Վ-Ւ — while of the vowels: Ե-Է and Ո-Օ, added to which the 21st letter «Ը» is augmented, which is subject to too much confusion with its shadow, «short ը», concocting tricks. Therefore, the main aim of the work is to remedy as far as possible orthographical errors and point out ways to overcome the orthographical obstacles arising from homophonotous letters.

The newly published book is not simply an orthographical guidebook. It has two other aspects to it, as well.

First, glossology. The author, partially, bending his head on numerous homophonotous words, deciphers or etymologizes them, pointing the secrets of the construction of Armenian words. He leaves his readers face to face with very interesting discoveries.

Second, punctuation. This is another vulnerable point with students, because it is not taught in sufficient manner or urgency in schools. The book devotes about 20 pages to the punctuation marks of Armenian, explain in detail the rules and spheres of utility of each mark and providing numerous impressive examples for all of them.

The Armenian Missionary Association of America, which in its centennial history has always and continually stood by the Armenian school and the Armenian student, believes, with this newly published grammar book it benefits the rebirth and vitality of Western Armenian, and would have placed a useful tool in the hands of Armenian-speaking and Armenian-writing individuals.