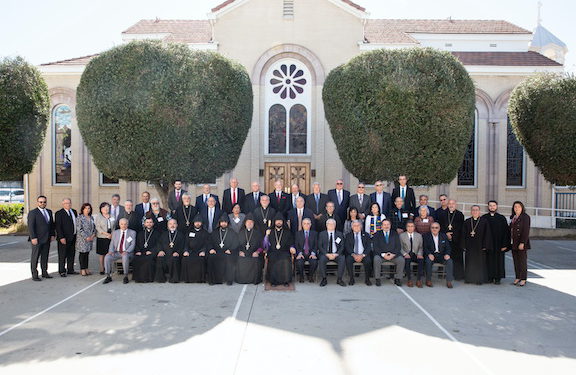 The participants of the Prelacy National Representative Assembly

On Friday, October 29, the 49th National Representatives Assembly (NRA) of the Western Prelacy convened at Avedissian Hall in the Holy Martyrs Church in Encino.

Western Prelate Bishop Torkom Donoyan presided over the Assembly, with the participation of Central Executive members, Religious and Executive Council members, delegates of Western Prelacy parishes, Members of clergy, representatives of boards of trustees and Board of Regents.

The board of trustees of St. Sarkis Church in Pasadena hosted this year’s Assembly. At the conclusion of the Assembly, a dinner was held to celebrate the first anniversary of the election of Bishop Torkom Donoyan as Prelate.

Executive Council, Clergy Board of Trustees Meeting
Prior to the official convening of the NRA, the prelate presided over an advisory meeting of the Prelacy Executive Council, clergy, and board of trustee chairs and representatives. Executive Council Chair Vahe Hovaguimian welcomed participants and invited H.G. Bishop Torkom Donoyan, Prelate, to conduct the opening prayer and address the meeting.

The prelate spoke about the emergence of the Armenian Church as a necessary structure in the formation of Armenian statehood and Armenian identity. Recognizing the importance of the existence of the Catholicosate of Cilicia in Diasporan life, he noted that our prelacies are called “national” prelacies because they house our people and, in fact, belong to the people.

An informal conversation ensued with parish delegates presenting a variety of topics covering challenges and concerns within their communities as well as current and future projects. The focus of the conversation turned to our youth and the necessity to listen to their needs and concerns, and the means with which to address them. Participants agreed to utilize advanced and applicable technologies to communicate, and to maintain utmost honesty in addressing their concerns and in meeting their spiritual needs.

Catholicos Aram I Message
The 49th session of the NRA formally convened at 2pm with the opening of the first session. After opening prayer, the prelate welcomed participants and invited Very Rev. Fr. Muron Aznikian to deliver the statement of His Holiness Catholicos Aram I to the Assembly.

In his statement, the Catholicos declared the reorganization of all spheres of the Western Prelacy and activities in order to unite around the prelate and become a force to further advance the Western Prelacy, to give new impetus to Christian education programs, to increase awareness and commitment of Armenian youth, and continue to work toward the revitalization and recovery of the Lebanese-Armenian community.

Prelate’s Message
After greeting the Assembly and those present, the prelate talked of the catastrophic global epidemic and its consequences, saying: “As you know, for more than a year, we have been coping with unprecedented difficulties due to the coronavirus pandemic; our churches were closed to the public for months and our schools closed their doors, forcing students to continue their education virtually. In short, our collective lives were put on hold. We are, however, slowly returning to some semblance of normalcy, with the grace of God.”

Continuing, the prelate addressed the painful affects of the war in Artsakh on our national psyche. “Today, we commiserate over the loss of martyrs from more than one generation, over those still in captivity, and over the loss of our sacred lands, religious, national, and cultural institutions captured and desecrated by the enemy. It is distressing to acknowledge that only a portion of Artsakh remains in our hands today, and our compatriots living on those lands are in constant danger and in economic distress. Artsakh needs our utmost spiritual, moral, and financial support.

Turning to the dire situation of Lebanese-Armenians, the prelate said, “Furthermore, we as a nation are dealing with internal and external political instability in Armenia, and the Caucuses in general. We are dealing with the crisis in Lebanon: the August 4, 2020 port explosion in Beirut, collapse of the economy that resulted in widespread poverty, creating an unparalleled crisis for the Armenian community—individually and collectively—with its religious, national, cultural, social and charitable institutions. Hence, we can say with certainty that our people and our nation have not faced such complex, grave, and harsh circumstances in recent history.

Finally, Donoyan stressed that it pains him to state that there have been disagreements and certain intolerances in our community. “In addition to the aforementioned, our local community has also endured a number of challenges due to the multifaceted and extraordinary pan-Armenian and national crises. Throughout these grueling times, we have continued to pray, to wish for the best and to do whatever is humanly possible to extend a helping hand, God’s love, and spirit of brotherhood to our people in Artsakh and Lebanon.”

Bishop Donoyan outlined activities of the 2020-2021 fiscal year and called on the Assembly to work hand-in-hand and heart-to-heart.

49Th National Representative Assembly Session 1
Following the prelate’s spirited address, the first session was called to order with the election of the resolutions and voting committees, respectively. Executive Council vice Chair Meher Der Ohanessian presented Western Prelacy’s financial report for the fiscal year, followed by Executive Council Treasurer Kaloust Agopian who presented an addendum covering the first six months of the current fiscal year. Specifically, Agopian addressed the issue of a sizable debt accrued the previous year, which has since been cleared, thanks to the efforts of the prelate and the Executive Council.

The Assembly then deliberated on proposed Prelacy Board of Regents by-law changes, deciding to table the matter until the 50th NRA.

Following the auditing committee report, the body reviewed the annual activities of the prelate and Religious and Executive Councils, and commended their achievements and undertakings, noting that the prelate, through his activities and outlook, has succeeded in creating a positive environment in the Western Region, in spite of extreme difficulties. Parish clergy specifically noted the positive outcomes of the prelate’s two-three day-long pastoral visits to distant parishes that helped to bring out younger community members and unite them around the Church.

On communication and outreach, the Assembly noted positive changes in Prelacy media outlets and messaging trends. It also commended the expansion of the official Prelacy publication to adopt a broader, more comprehensive worldview through original articles as well as
a wider array of writers and the involvement of new human resources. The publication will be called CILICIA.

Highlighting the prelate’s pan-Armenian outreach and unwavering efforts to provide assistance to those outside our community, the Assembly commended the unifying force that enables the prelate and the Religious and Executive Councils to achieve progress.

During discussions, organizational issues and concerns of youth, prevalent in certain Prelacy parishes, were reviewed. H.G. Bishop Donoyan, Prelate, reminded participants to approach these matters with utter respect and love and to spread tolerance in our communities, and maintain a supportive attitude, “In order to secure increased prosperity and advancement, not only in the Western Prelacy but also in the lives of all Armenians,” he stressed.

49Th National Representative Assembly Session 2
The resolutions committee introduced a by-law commending the fiscal activities of the prelate and Religious and Executive Councils; the Assembly unanimously voted in favor.

The next agenda item called for a plan of action for the upcoming fiscal year based on recommendations from Prelacy parishes, including an invitation from St. Marys Church in Glendale to host the 50th NRA; the Assembly unanimously voted in favor.

The Assembly reviewed and approved the proposed budget for the upcoming fiscal year and also elected Hagop Yedalian to the Auditing and Budgeting committee, joining current members Ohan Filhanessian and Kahren Beniasians.

In closing the meeting, the Assembly Tivan thanked participants and wished them well, then gave the floor to H.G. Bishop Donoyan, Prelate, who welcomed his first year as prelate and noted that it was certainly an exciting and fast-paced year; he proceeded to congratulate the Assembly for a high-level and constructive meeting. The prelate concluded the Assembly with a closing prayer.

Religious Conference
Prior to the convening of the 49th National Representative Assembly of the Western Prelacy, the Prelacy Religious Council held its yearly one-day conference on Thursday, October 28, 2021 at Western Prelacy headquarters. H.G. Bishop Torkom Donoyan, Prelate, presided over the meeting.

The clergy participated in evening mass, followed by spiritual reflection by the prelate who chose John 2:17.

The prelate spoke about the necessity of spiritual fathers to approach the House of the Lord, religious rituals and services, the faithful and individuals, only with zeal.

The conference examined rites of church services, reviewed current and administrative issues, and the schedule of upcoming religious holidays and events. After the discussion, proposals were submitted for review by the 49th NRA.

As the last agenda item, the conference held election of religious delegates.