What Does Christmas Tell Us? 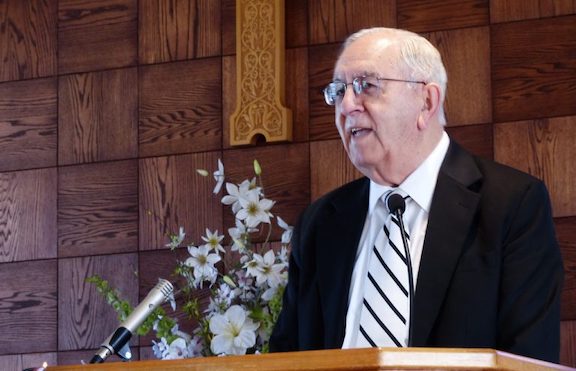 Christmas means many things to many people. For many, it is a time for family reunions and family celebrations. For some, it is a party and fun time. For children, it is Santa Clause and a time to receive gifts. For store-owners, it is a booming business time.

A story that has touched me about the Christmas season is that of a four-year-old little boy named Billy. Standing before his father’s large portrait, Billy was gazing intensely. His father was a soldier and was away from home. It was Christmastime. His mother asked the little boy, “Billy, what do you want for Christmas?” Billy said, “I wish my daddy would step out of this picture and be with us.”

This is what our heavenly Father did more than two thousand years ago in Bethlehem. He came to this world and identified with us. He came to communicate with us. For many centuries people had observed God’s handiwork in nature. People knew that the supreme Power, God had created the universe and our world. In some ways, the universe, this world, is a picture of God—but pictures are not reality. Pictures convey images, but cannot carry on a relationship. The stars on a clear night are beautiful, but they don’t have a heart.

People can see God’s handiwork in nature, but those beautiful things are only images, and images are partial representation of reality. How much better it would be if God would, as it were, step out of the picture and communicate with people face to face! The message of Christmas is that this is exactly what God did. Two thousand years ago, on the first Christmas Day, God stepped out of the picture and revealed Himself to humanity. In chapter one of the Gospel of John, the author tells us what Christmas means to us.

First, Christmas tells us that God was incarnated. God became man to visit His creatures. John writes, “In the beginning was the Word (Christ) and the Word was with God and the word was God…and the Word became flesh and dwelt with us,” (John 1:1, 14). This was a most spectacular reality in the history of mankind. God became human. This was unheard of. God was supposed to be the Unchanging Reality; the transcendent God has become an Imminent God. He has taken upon Himself human flesh and made His dwelling among us.

Second, Christmas tells us about God’s purpose—as to why God became man. The Gospel of John tells us that mankind was walking in darkness, in sin, and God, through Jesus Christ, came to illuminate its path. In other words, man had alienated himself from God and was lost.

The message of Christmas is essentially a message of salvation—salvation from life which is being wasted because it is being mismanaged and lost its purpose.

During his ministry, Jesus conveyed this message in a series of three parables in Luke 15—the parables of the lost sheep, the lost coin, and the lost son. Jesus makes crystal clear that the nature of his mission to the world is to find and restore to its real function that which is strayed, out of circulation, and detached from its original purpose, and is thus being tragically wasted.

The sheep which is strayed and is no longer part of the flock, the coin which is lost and is out of circulation, and the son who is lost and is dead to his family are vivid pictures of the tragic waste, which we see around us in human lives and nature as well. From such loss of purpose and waste of life, Christ has come to restore us to God, to whom we truly belong. In Him alone can we live and move and have our being.

Third, Christmas tells us that God gives us the choice to accept or reject Him. The Gospel of John writes, “He came to His own and His own did not receive Him. But those who received Him He gave the right to become the children of God,” (John 1:11-12). This means that human beings have a choice to make: to accept or reject Him. From the beginning of creation God has given human beings free will to choose.

Christmas is God’s gift to us. When does a gift become a gift? A gift becomes a gift when there is a giver and a recipient. When someone gives you a gift and you refuse to accept it, it ceases to be a gift.

On the first Christmas Day, God came to us as the greatest Gift. Some people received Him but many refused to welcome Him into their lives. Throughout the ages he has continued to come to His creatures as a gift. We have a choice to receive or reject Him. Those who accept Him will become, in John’s words, “Children of God.”