‘Where Is Your Groom?’ Part II to Perform in Watertown

WATERTOWN, Mass. – Following a laugh out loud debut at New York City’s Miller Theatre, where over 500 audience members gathered to see the sequel to the popular comedy “Where Is Your Groom?”, the cast is preparing for their performance on November 11 at the Mosesian Center for the Arts.

Promising a night of laughs while taking a closer look at the Armenian-American experience, the play’s sequel centers on the wedding of a young couple whose parents want to plan the wedding their own way. As the patriarch, Koko, says to his daughter, “We are giving you the wedding of our dreams!” A colorful cast of supporting characters, from the pot-stirring matchmaker to the odar wedding planner, round out the laughs and warmth of the play, which satirizes the Armenian family, community and cultural life. 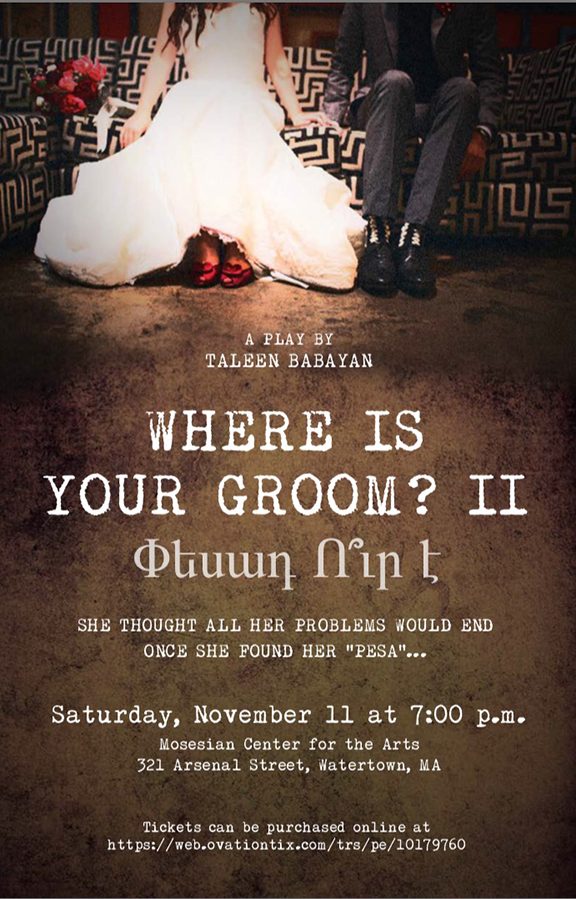 Connecting with audience members of all ages and featuring musical nostalgia, Armenian idioms and a relevant storyline, the play is enjoyable for the whole family.

“’Where Is Your Groom?’ and its sequel have resonated so well with the audience because they all saw pieces of themselves in the characters,” said Nairi Hartounian, a graduate student at New York University studying Public Relations and Corporate Communication. “The storyline’s appeal and humor has cultivated a strong and lasting impression on audience members.”

Playing the role of matriarch Siroun, the overbearing yet clever character reminded Hartounian of “the strong Armenian women I was surrounded by growing up.”

While the group expresses their creativity on stage, offstage they have created genuine friendships as members of an ensemble cast and crew of 20 Armenian young professionals who have shared their love of the Armenian culture to over 3,000 audience members, who have referred to the play as a “dynamic story” with a “spot-on” cast who left “tears of laughter” in their eyes.

“Being involved in this play production has allowed me to get closer to my Armenian roots,” said Raffie Bagrevandian, a real-estate professional from Astoria who plays the role of Russian-Armenian businessman Sergei. “As the next generation of Armenians who will carry on the torch, it’s our duty to preserve and share our culture and heritage while stimulating dialogue.”

The original “Where Is Your Groom?” performed in Watertown back in 2014 to a jovial audience and the cast is eager for its return performance in a significant Armenian Diasporan community.

“As a former Boston resident during my college years, I was an active member of the Armenian community both on and off campus,” said writer and director Taleen Babayan. “I’m excited for our group to perform “Where Is Your Groom?” for a historic Armenian community that has promulgated our culture over the past century.”