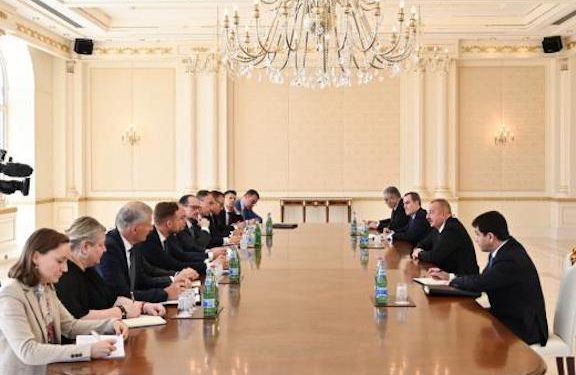 President Ilham Aliyev of Azerbaijan on Friday said he hoped that Armenia will agree to a “peace treaty” with his country so that the two countries can move beyond what he called a “post-conflict” situation.

He made the remarks in Baku during a meeting with visiting foreign ministers from the European Union who have been dispatched to the region by the EU’s High Representaties for Foreign Affairs, Josep Borrel.

“If we do not have a peace agreement with Armenia, it means that there is no peace. There is no peace not only between the two countries but also in the South Caucasus. We need peace and sustainable development, forecasting, zero war risk, we do not need war. We did not need a war before,” Aliyev told visiting diplomats, according to the Azertag news agency.

In his presentation, of course Aliyev left out the fact that Azerbaijani troops have breached Armenia’s sovereign border and, since May 12, have amassed a reported 1,000 in Armenia’s Gegharkunik and Syunik provinces. During this times Baku’s forces have killed one soldier and have captured six other, who remain hostages.

The Azerbaijani leader also did not comment on his government’s sham trial of Armenian prisoners of war and civilian captives, more than 200 of whom are still under captivity. Last week Aliyev admitted to his Turkish counterpart, Recep Tayyip Erdogan, that he is using the captives as political leverage,

Aliyev also didn’t brief the EU diplomats about the systematic destruction of Armenian churches and other historic monuments.

He did, however, complain to guests about Armenia’s unwillingness to engage in dialogue to achieve this so-called “peace treaty.”

“I have repeatedly said that we want to move from a post-conflict situation to peaceful development and cooperation in the South Caucasus. Unfortunately, we have never heard anything like this from the Armenian government. The Armenian government is ignoring any of our statements about starting negotiations on a peace agreement with Armenia,” said Aliyev.

The Azerbaijani leader opined that perhaps the pre-election climate in Armenia may have been unsuitable for making declarations about a “peace treaty,” but, he said, “after the elections in Armenia, we hope for a positive response. Of course, I think that this issue will be discussed during your meetings in Armenia.” The EU delegation arrived in Yerevan on Friday.

Aliyev pointed to Azerbaijan’s participation in the OSCE Minsk Group process as proof that his country has always been an advocate for peace, of course, neglecting to detail the brazen aggression with which it attacked Artsakh last fall.

“We are currently in a state of post-conflict development. The Nagorno-Karabakh conflict has been resolved. There is nothing to negotiate in this regard. The trilateral declaration, signed on November 10, is not just a ceasefire agreement, as some international politicians have tried to present. Anyone looking at this document will see that it is not only about the ceasefire, but also about many other issues. We need to think about the post-conflict situation,” added Aliyev.

Western Prelacy Establishes Funds to Mark ‘Year Of the Diaspora’