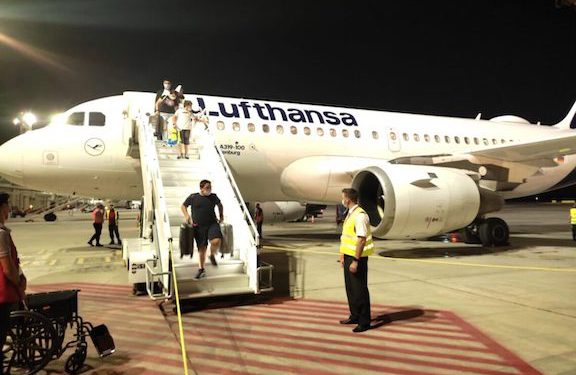 Armenia’s Deputy Minister of Territorial Administration and Infrastructures Armen Simonyan and Germany’s Ambassador to Armenia Michael Banzhaf were at the airport to greet the crew and passengers of the Airbus A319 flying from Frankfurt.

After more than a decade hiatus, Lufthansa announced on Thursday that it would return to Armenia beginning with its Friday, promising to have 16 flights per week in the summer.

“Lufthansa Group’s presence in Armenia has rather broad meaning; it will enable Armenian citizens to travel to 280 destinations in 100 countries. Currently none of the airlines conducting flights in Armenia offers such opportunities. This combination will allow Lufthansa Group to transport more than 100 million passengers every year,” said Marcelo Wende, the CEO of Armenia International Airports on Thursday He added that this will boost tourism in Armenia.

Pullem said the high growth of customers’ demand allowed them to expand their flights schedule.

“We are now making new investments in technologies in the aircraft, we’ve improved infrastructures, and we are able to reduce carbon emissions, which allows to protect the environment,” said Pullem.

Rene Koinzack, Lufthansa Group’s Head of Sales for Ukraine, Belarus, Turkmenistan and South Caucasus said Thursday that they have rather big experience in terms of flights to Armenia.

“The Austrian airlines is flying to Armenia for already 20 years. This is an important day for us because Lufthansa airline is returning to Armenia. It was in Armenia for the first time in 1988 December, when it supplied 108 tons of aid,” Koinzack said, referring to the humanitarian aid brought during the aftermath of the 1988 Earthquake.