AYF 'With Our Soldiers' Raises $30,000, Commits to Providing Support 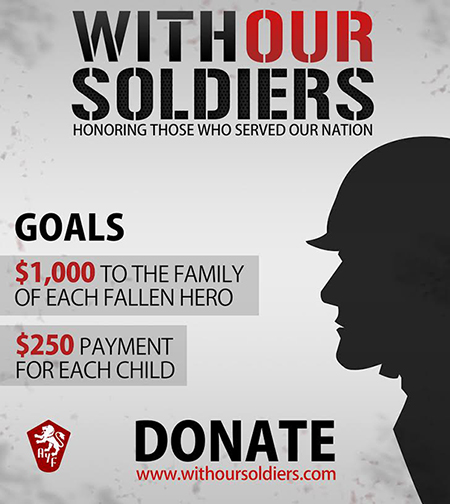 In the aftermath of the recent Azeri aggression against the people of Artsakh, the Armenian Youth Federation announced the re-launching of its ‘With Our Soldiers’ campaign with the aim of providing financial assistance to the families of the fallen soldiers. Since early April, the task force in charge of the project has taken a number of steps in order to raise the necessary funds and organize the efforts on the ground to distribute money to the families who lost their loved ones.
So far, more than $30,000 has been raised by the organization through the generous contributions of members, donors and supporters. The AYF Glendale chapter organized a raffle, for example, and that yielded $3,500 for the campaign. In addition to these funds, the students at the Pilibos Armenian School raised $10,000 through their own efforts. The money was taken to Armenia by the Junior class, which is taking its traditional trip to the Homeland, and will be distributed to the affected families in Armenia during the next two weeks. Additional fundraising efforts are currently underway and will undoubtedly help the task force reach its financial objectives.
‘Our goal is to be able to show support to each family that has suffered a loss during the Four Day War,’ said David Arakelyan, the chairperson of the With Our Soldiers task force. ‘We are committed to providing $1,000 to each family and another $250 for each child that has lost a parent. No amount of money can make these families whole again, but it is our duty to show support for those who have sacrificed so much for us during these challenging times.’
The operations in Armenia are coordinated by AYF Western US members and Alumni who are currently residing in the Homeland. They already began visiting the families of the fallen soldiers, delivering the funds that were sent to Armenia earlier this month. The priority is being currently given to families with children and those classified as ‘very needy.’ The task force will keep the community informed about its efforts on the ground in the coming weeks.
‘It is important for all of us to give what we can to those who are keeping our country safe today,’ adds Zaven Keuroghlian, a member of the WOS task force. ‘Our community is encouraged to support these efforts by donating to the campaign, buying promotional materials, and joining our social media platform by liking us on Facebook in order to stay informed about ongoing developments as well as events organized by the task force.’
The AYF’s ‘With Our Soldiers’ campaign, originally launched in 2012, was restarted in the aftermath of the Four Day War with the aim of providing assistance to the families of the fallen soldiers. To learn more about the campaign or to make a donation today, you can visit www.withoursoldiers.com.
Founded in 1933, the Armenian Youth Federation is the largest and most influential Armenian American youth organization in the world, working to advance the social, political, educational and cultural awareness of Armenian youth.

‘Map of Salvation’ Armenian Genocide Documentary To Screen In Glendale