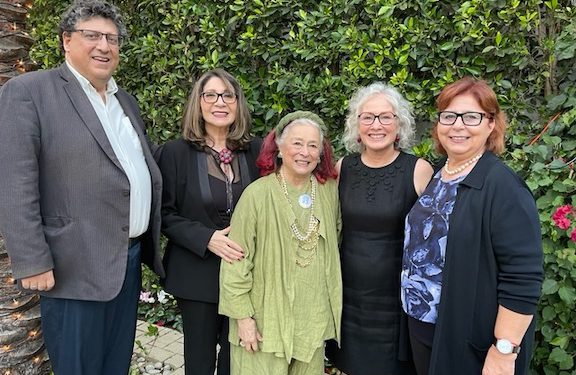 LOS ANGELES—It was a star-studded program, as well as a festive gathering, when approximately 100 guests celebrated the 10th Anniversary of the Women’s Support Center.

The event, which was held on Saturday, December 4, was hosted by prominent and generous benefactors Zarig and Jack Youredjian at their home in Toluca Lake. Nearly 100 guests, consisting mainly of activists, Armenian International Women’s Association members, community leaders, as well as Women’s Support Center devotees were in attendance.

Tufenkian Foundation Trustee Antranig Kasbarian served as Master of Ceremonies, representing the Tufenkian Foundation and, together with the Armenian International Women’s Association and USAID, were the founders and driving forces behind the creation of the Women’s Support Center. Kasbarian stressed the positive role played by then U.S. Ambassador Marie Yovanovitch, who displayed strong support and appreciation for Armenia, its people, and the domestic problems they were confronting.

Early on, along with Joan Agajanian Quinn, Yovanovitch encouraged USAID to develop a partnership with AIWA and the Tufenkian Foundation, focusing on women’s rights and particularly the problem of domestic violence. At the beginning of the program, Armenian society was still in a state of denial about domestic violence, relegating it as a family matter or ignoring it entirely. Ten years later, among its various accomplishments, the Women’s Support Center can proudly state that this issue has been brought irreversibly into public consciousness and today there exists a grudging but growing acceptance both by public officials and civil society.

Nicole Nishanian, President of the Los Angles affiliate of AIWA, also welcomed the guests and emphasized AIWA’s pride in being associated with this program which has brought progressive change to Armenia regarding women.

Kasbarian expressed the regrets he received from the Lillit Makunts, Armenia’s new Ambassador to the U.S., who was scheduled to appear, but was unable to attend after being called to Armenia following recent escalations of violence on its borders.

WSC Founder and Executive Director Maro Matosian, in her presentation reflected on its ten-year journey. “WSC has come a long way in the 10 years since its inception,” Matosian stated. “We were a completely unknown organization and now we are considered the premier Domestic Violence support center running the only two professional shelters in Armenia. We started with 40 beneficiaries and now we serve annually over 300. We trained the helped create Domestic Violence support centers, one in each region of Armenia, and now work to standardize our approach for systematic response to the protection of victims of Domestic Violence. In addition, government agencies, including the Ministry for Social Affairs, rely on us as a source of expertise and information on the subject.”

Special Guest of Honor, Marie Yovanovitch, former U.S. Ambassador to Armenia, was the keynote speaker and in her presentation, not only focused on celebrating the ten years of the excellence and impact of the WSC, but emphasized that we are also celebrating thirty years of Armenian independence. Yovanovitch stated that “…in fact, next week is the anniversary of the signing of the Belovezhskoyoe Accords, which dissolved the Soviet Union, something many of us never thought we’d see. The past three decades have been a consequential time for Armenia.  Independence, war, political upheavals, economic struggle, social change, another war. And Armenia still stands.  Armenia still thrives. As Armenia has done throughout the ages – and will into the future.”

Yovanovitch reported that while she was in Armenia she traveled constantly, all over the country, and met people who kept on going despite the challenges. They wanted a better life for themselves, and most importantly, a better future for their children. It was inspiring. These trips were the highlight of her three years in Armenia. In 2010, following the tragic murder of a young woman by her husband and mother-in-law, a nucleus of people were finally ready to admit that domestic violence existed in Armenia and that something had to be done. This issue was at the top of Yovanovitch’s mind and she saw an opening and a part of the solution to a very real problem.

The Women’s Support Center was established in 2010 and has made not just an important contribution, but has achieved real results. It is saving individuals—women and their children. It is working at the institutional level—to change laws, build budget support, partner with police, and train social workers. Yovanovitch emphasized that the WSC is at the forefront of the most important thing: changing the way Armenians think about domestic violence.

“Changing that mindset, that somehow it is the women’s fault,” she stated “and that raising this issue undermines the family, is absolutely crucial,” said Yovanovitch. “When domestic violence is not accepted in a culture: a woman feels more comfortable standing up for herself; friends, families, neighbors, report it; the police take the action seriously; social services are provided so that the woman and her children have a place to go; the perpetrator is held accountable. Once that cultural shift is made, domestic violence will still be with us, but it will be far less prevalent. Addressing domestic violence strengthens the family; it strengthens the next generation, and that strengthens Armenia.”

In conclusion, Yovanovitch expressed her thanks to the Tufenkian Foundation, AIWA and USAID for having the vision and coming together in a public-private partnership to put their collective shoulders to the wheel and make that vision a reality and a success. She also thanked Antranig Kasbarian and Maro Matosian for working day in and day out for the WSC, and a shout out to the hosts, Jack and Zarig Yaredjian for this wonderful evening.

This celebration of the 10th Anniversary of the Women’s Support Center  resulted in fundraising totals well over $100,000.