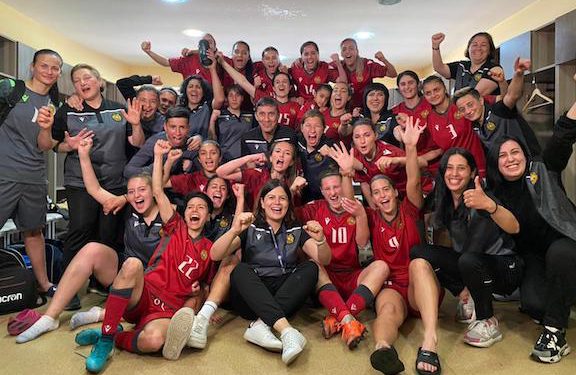 Playing with the Coat of Arms on your chest is an unexplainable feeling of humility–a product of hard work, dedication, and determination. I am 19-year-old Nyree Der Megerdichian and I play soccer on the Armenia Women’s National Team.

Representing Armenia on the field and on an international stage as a Diasporan Armenian is tremendously humbling and I am so thankful to be able to be a part of it. As a team in recent months, we have participated in a series of friendly matches and tournaments in order to prepare ourselves for the upcoming World Cup qualifying games that will begin in September of this year and conclude in April, 2022.

In March, Armenia hosted an international friendly tournament called “Our Game,” and ended up clinching second place. The participating teams were Lithuania, Jordan, Lebanon and Armenia. For the upcoming World Cup qualifiers, Armenia was drawn into Group F which consists of Norway, Belgium, Poland, Albania, Kosovo and Armenia.

The Armenia Women’s National team is very diverse and consists of Armenian girls from all around the world ranging from the United States to Russia, Germany and of course Armenia. Prior to March 2020, the last time Armenia fielded a women’s national team was in 2012. Thanks to the efforts of Anna Tadevosyan and the rest of the Football Federation of Armenia, the program has been resurrected, revamped and continues to grow. Under the leadership of newly appointed head coach Armen Sanamyan, the team continues to build chemistry and develop, gaining momentum to be the best we can be as the qualifiers begin.

Women’s athletics in Armenia is slowly gaining steam and it is very exciting to be a part of this new chapter. I have faith in our team and am looking forward to watching our success grow as we continue to make history within the scope of Armenian sports. Support from the Armenian community is vital in the progression of this team and knowing that we have the backing of friends and family gives us extra motivation to continue to make everyone proud. Wish us luck for the games to come! Go Armenia!!!!