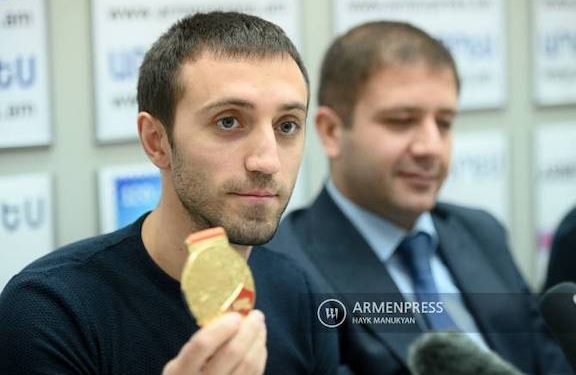 Fresh off being crowned world gymnastics champion, Artur Davtyan said his next goal is to win a gold medal at the Olympic Games.

Davtyan clenched the coveted title after a stunning victory on Sunday at the World Gymnastics Championships in Liverpool, England.

“I am very happy that I was able to win this medal and bring it to our homeland,” Davtyan said at a press conference held at the Armenpress newsroom on Wednesday.

“In line with this, I want to thank our coaches, the President of the Federation and all those who have a small investment in this achievement. We will always do our best to keep Armenia’s reputation elevated around the world. Next year is more important as it will be the rankings for participation in the Olympic Games,” he explained.

He said that having won no medals in World Championships and them subsequently winning gold has prompted him to work hard to win a gold medal in the Olympic Games, which will be held in Paris in 2024.

President of the Gymnastics Federation of Armenia Gagik Vanoyan said at the same press conference that Davtyan’s gold medal in the World Gymnastics Championships was a result of dedicated and hard work.

“It’s not a secret that in recent years gymnastics is constantly garnering good results. And all this is thanks to our coaches led by Hakob Serobyan, as well as thanks to our boys who are not wasting any effort and energy. We managed to show the entire world that hard work and dedication can lead to such glorious victories,” Vanoyan said.

The President of the Federation said the efforts to build a new gymnasium are underway through initiatives of the Armenian government and Yerevan City Hall.

“I am more than confident that we will have a gymnastics hall that will meet all international standards in two to three years,” he added.

Davtyan and his fellow gymnast Harutyun Medinyan who won a bronze at the World Gymnastics Championships had an audience with Prime Minister Nikol Pashinyan on Thursday. They were joined by Vanoyan and Serobyan, their coach.

Davtyan and Merdinyan shared their impressions of the World Championships and briefed the prime minister about upcoming programs, including those related to the 2024 Olympic Games.

A number of issues related to the further development of gymnastics were discussed during the meeting. Specifically the construction of two gymnastics centers were discussed. One, named after Hrant Shahinyan is currently under construction through government funding, while the designs of a second one, named after Albert Azaryan, are being reviewed. According to Pashinyan’s press office both facilities will be operation in 2025 and equipped with modern equipment.

“It is evident that such a success can only be achieved in an environment where there is talent first and only teamwork—and I want to emphasize this,” Pashinyan said after congratulating the gymnasts.

“I must also say that all of us—the Republic of Armenia, our country, the people—need such victories. I think young people should pay attention to such victories as they seek impetus while planning their future or simply or simply engaging in sports,” Pashinyan added.