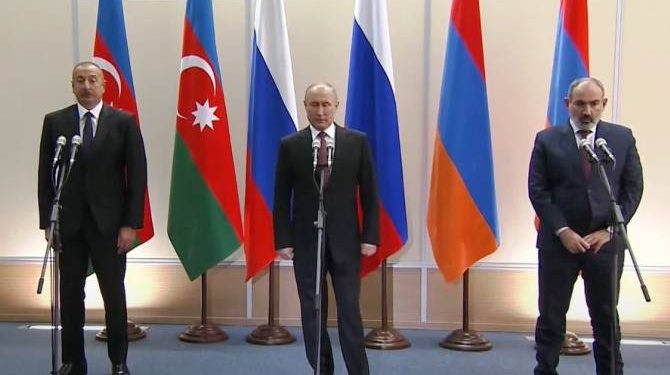 From left, the leaders of Azerbaijan, Russia and Armenia in Sochi on Nov. 26

YEREVAN (Azatutyun.am)—Armenia’s government insisted on Tuesday that it will not cede any extraterritorial land corridors to Azerbaijan as a result of the latest talks between the leaders of the two states hosted by Russian President Vladimir Putin.

Putin, Armenian Prime Minister Nikol Pashinyan and Azerbaijan’s President Ilham Aliyev met in the Russian city of Sochi on Friday one year after a Russian-brokered ceasefire that stopped the six-week war over Nagorno-Karabakh. They reported further progress towards the opening of transport links between Armenia and Azerbaijan envisaged by the ceasefire.

In particular, Putin said a trilateral task force dealing with the matter will meet in Moscow this week to announce “decisions which we agreed today.” He did not elaborate.

The truce accord commits Armenia to opening rail and road links between Azerbaijan and its Nakhichevan exclave. Armenia should be able, for its part, to use Azerbaijani territory as a transit route for cargo shipments to Russia and Iran.

Aliyev has repeatedly claimed that the deal calls for a special “corridor” that will connect Nakhichevan to the rest of Azerbaijan via Armenia’s Syunik province. Commenting on the Sochi talks over the weekend, he declared that the “Zangezur corridor is becoming reality.”

The Armenian Foreign Ministry effectively denied that on Tuesday. The ministry spokesman, Vahan Hunanyan, said a joint statement issued by Aliyev, Pashinyan and Putin at Sochi “refuted propaganda notions about a ‘corridor’ or the logic of a corridor.”

“In case of the unblocking of roads, both the railway and highways [passing through Armenian territory] will be under Armenia’s full jurisdiction and control,” Grigoryan told the “Hraparak” daily.

Accordingly, he said, cargo shipments to and from Nakhichevan will be subject to Armenian customs controls and other border checks.

The assurances came amid continuing Armenian opposition allegations that Pashinian agreed to make more concessions to Baku at the expense of Armenia’s territorial integrity. A senior opposition lawmaker, Armen Rustamyan, suggested on Monday that Aliyev’s latest statement about the “Zangezur corridor” is the result of his unpublicized “oral understandings” with Pashinyan.

Visiting Yerevan on November 5, Russia’s Deputy Prime Minister Alexei Overchuk said the trilateral working group has agreed that Armenia and Azerbaijan will “retain sovereignty over roads passing through their territory.” The Russian Foreign Ministry also reported such an agreement.