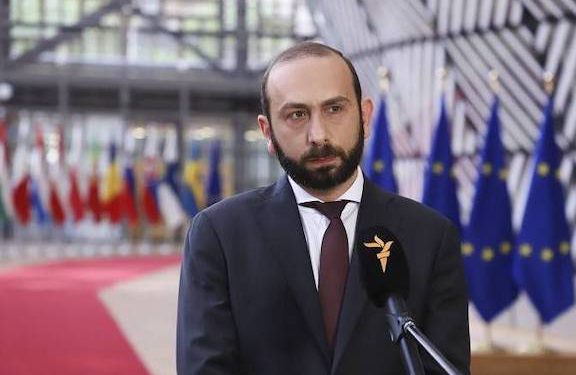 Pashinyan, Aliyev to Meet Next Week

YEREVAN (Azatutyun.am)—Azerbaijan has not yet accepted Armenia’s counterproposals regarding the agenda of official negotiations on a peace treaty between the two South Caucasus states, according to Foreign Minister Ararat Mirzoyan.

In March, Baku presented Yerevan with five elements which it wants to be at the heart of the treaty. They include a mutual recognition of each other’s territorial integrity.

The Armenian government said they are acceptable to it in principle but should be complemented by other issues relating to the future of status of Karabakh and the security of its ethnic Armenian population.
Mirzoyan reaffirmed this position on Wednesday when he visited Brussels to co-chair, together with the European Union’s foreign policy chief, Josep Borrell, a session of the Armenia-EU Partnership Council.

“It’s crucial and principal for us to discuss the issue of the rights and security of Armenians in Nagorno-Karabakh and, accordingly, the status of Nagorno-Karabakh,” he told RFE/RL before the meeting. “We also think that it is important to continue these negotiations on the peace treaty in the frames of and according to the mandate of the OSCE Minsk Group co-chairmanship.”

“So far we haven’t heard a positive reaction from Azerbaijan to these points,” he said. “But you know that efforts are being made to make these negotiations possible.”

Tajikistan – The foreign ministers of Armenia, Russia and Azerbaijan meet in Dushanbe, May 12, 2022.
Azerbaijani Foreign Minister Jeyhun Bayramov dismissed last week that the document presented by Yerevan, saying that it “can’t be called proposals.”

Borrell acknowledged that the two sides are “very far” from achieving that. He said the EU stands ready to assist in the signing and implementation of such an accord.

Aliyev and Pashinyan also agreed to set up before the end of April a joint commission on the delimitation and demarcation of the Armenian-Azerbaijani border.

Mirzoyan said last week that the commission will hold its first session in Moscow on May 16-17. The meeting did not take place, however.

The Armenian minister said on Wednesday that the two sides disagree on unspecified “technicalities” of the commission’s work. “Hopefully in the upcoming days and weeks we will finally have this meeting,” he added.

Aliyev claimed on Wednesday that the first meeting of the commission was originally scheduled for April 29 but that the Armenian side cancelled it at the last minute. He said Yerevan also turned down a “preliminary” Azerbaijani proposal to hold the meeting on May 7-11.

Pashinyan will fly to Brussels on Sunday for fresh talks with Aliyev that will be hosted by the European Union’s top official, it was announced on Thursday.

Pashinyan’s press office said he will meet with European Council President Charles Michel separately before the trilateral talks. It gave no other details.

Michel will host the Armenian and Azerbaijan leaders for the second time in less than two months.