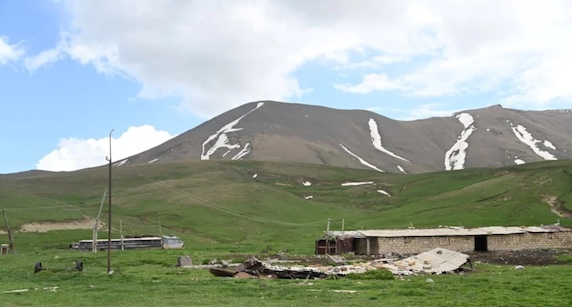 YEREVAN (Azatutyun.am)—Armenia and Azerbaijan have resumed direct talks with Russian mediation over a continuing military standoff at several portions of their border.

The official Russian TASS news agency reported that representatives of the two South Caucasus states as well as Russia met in Moscow for that purpose on Wednesday. It gave no details.

According to Armenian press reports, the talks were hosted by Lieutenant-General Rustam Muradov, the commander of Russian peacekeeping troops that were deployed in Nagorno-Karabakh following last year’s Armenian-Azerbaijani war. The Hraparak newspaper said that Muradov arrived in Yerevan on Thursday morning.

The Armenian Defense Ministry confirmed the renewed negotiations but refused to specify their agenda or results. It said only that the three sides are planning to hold more such meetings.

Muradov already participated in a series of talks held by Armenian and Azerbaijani military officials after Azerbaijani troops reportedly crossed several sections of the border three weeks ago. The talks were stopped on May 19, with Armenia continuing to demand the immediate withdrawal of the Azerbaijani forces.

The Moscow talks came five days after Russian and Armenian defense ministers met in the Russian capital discuss the border dispute. According to the Armenian Defense Ministry, they agreed on “necessary steps” to resolve it. Defense Ministers Sergei Shoigu and Vagharshak Harutiunyan also spoke by phone on Monday.

Tensions on the border rose further after six Armenian soldiers were captured by Azerbaijani forces on May 27. A senior Armenian official said on Tuesday that Yerevan is “working around the clock” to secure their release.

The Defense Ministry in Yerevan reported on Wednesday another brawl between Armenian and Azerbaijani soldiers deployed at one of the contested border sections. It said two Armenian soldiers were injured in the clash that did not involve gunfire.