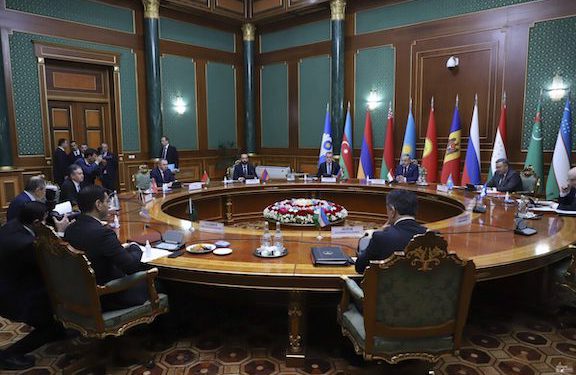 The foreign ministers of CIS member states meet in Dushanbe, Tajikistan on May 13

Armenia’s Foreign Minister Ararat Mirzoyan told his CIS counterparts that Yerevan seeks to guarantee the security, rights and freedoms of the Armenians of Artsakh, as well as ensure the status of Karabakh under a comprehensive settlement of that conflict.

However, Azerbaijan’s Foreign Minister Jeyhun Bayramov toed Baku’s position, that the Karabakh conflict was settled when Azerbaijani forces, aided by Turkey, unleashed their aggression on Artsakh and “liberated” it through the use of force.

This scenario played out at the CIS Foreign Ministers summit, which is begin held in the Dushanbe, the capital Tajikistan. This is where Mirzoyan and Bayramov met Thursday to discuss the parameters for so-called peace talks between Armenia and Azerbaijan. They also agreed that the first meeting of a commission tasked with advancing border delimitation between the two countries will be meeting next week in Moscow.

In his remarks on Friday, Mirzoyan told his fellow foreign, that his meeting with Bayramov and Russian Foreign Minister Sergei Lavrov the day before would be a step toward establishing peace in the region.

He reaffirmed Armenia’s commitment to the implementation of the agreements reached by the statements of November 9, 2020, January 11 and November 26, 2021.

Mirzoyan also reiterated Yerevan’s hope that the much-discussed peace talks would advance under the mandate of the OSCE Minsk Group co-chairs.

The group, which has been mediated the Karabakh peace process for more than two decades, seems to have dismantled as a result of the standoff between the West and Russia over the military campaign in Ukraine. The Minsk Group co-chairs seem to be engaged in the current Karabakh process as special envoys to the South Caucasus.