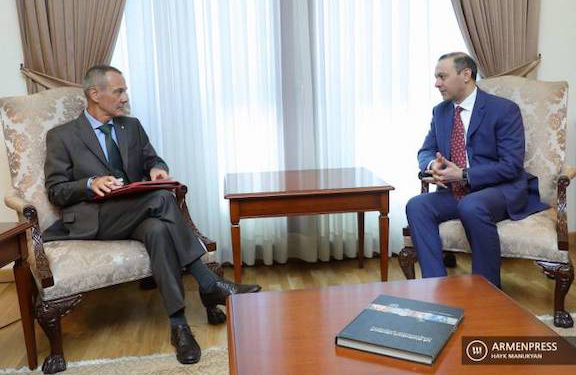 Armenia’s Acting Prime Minister Nikol Pashinyan on Friday raised the issue of the illegal prosecution of the Armenian prisoners of war during a phone conversation with the president of International Committee of the Red Cross Peter Maurer.

According to Pashinyan’s press office, he told Maurer that Azerbaijan’s actions are inadmissible, calling them a gross violation of international law.

Pashinyan said emphasized the need for the immediate return of all POWs and captives and told Maurer that Baku is deliberately withholding the actual number of Armenian captives.

Maurer assured Pashinyan that the ICRC will continue making all possible efforts for solving the humanitarian issues.

Armenia’s Acting Foreign Minister Armen Grigoryan held a similar discussion on Friday with the head of delegation of the International Committee of Red Cross to Armenia Thierry Ribaux.

Grigoryan highlighted the imperative for the immediate repatriation of Armenian POWs and civilian captives illegally being held in Azerbaijan and said their prosecution by Azerbaijan is unacceptable.

Grigoryan stated that according to Article 3 of the Geneva Convention, the captives have a status as prisoners of war, therefore they must be under the protection of international humanitarian law. He added that Azerbaijan’s policy contradicts the 8th point of the November 9 trilateral statement, according to which the exchange of POWs, hostages and other persons held must have taken place.

Grigoryan said that Azerbaijan was denying the fact that many POWs are under its control, which has been proven by numerous sources. Furthermore, he said, Baku is refusing to provide information about them, as well as is hiding the location of their detention.

He told Ribaux that Azerbaijan’s behavior gives serious grounds to suspect that serious crimes are being committed by Azerbaijan against the captives, as well as their enforced disappearances.

Touching upon the issue of providing humanitarian aid to the affected population, Grigoryan highlighted the need to expand the presence of international humanitarian organizations in Artsakh.

Grigoryan also briefed Ribaux on the current humanitarian situation caused by the Azerbaijani offensive operations against the sovereign territory of Armenia, expressing concerns that the continued presence of Azerbaijani armed forces in the Armenian territory disrupts the normal life of bordering residents and leads to violations of their rights.

Ribaux spoke about the actions taken by the ICRC aimed at ensuring communication between the captives and their families, as well as introduced his organization’s ongoing efforts in the border regions.