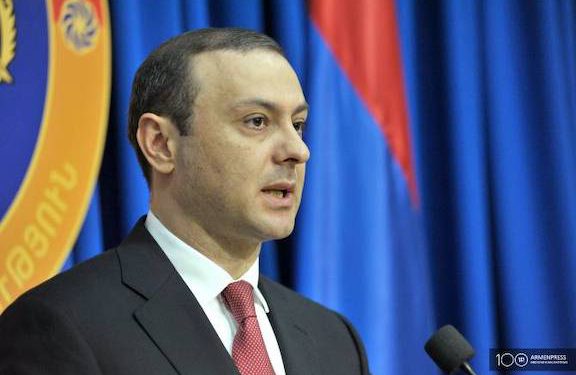 Armen Grigoryan, the secretary of Armenia’s Security Council, said Yerevan is ready to start a Turkish-Armenian “dialogue without preconditions” and discuss all thorny issues during a “gradual” normalization process.

Grigoryan did not explicitly deny that Prime Minister Nikol Pashinyan offered earlier this month to meet with Turkish President Recep Tayyip Erdogan. “We believe that a dialogue at a high and the highest levels is one of the ways of normalizing those relations,” he told reporters.

Erdogan claimed last week to have received the offer from Pashinyan through Georgian Prime Minister Irakli Gharibashvili. He appeared to make such a meeting conditional on Armenia agreeing to open a transport corridor that would connect Azerbaijan to its Nakhichevan exclave.

In his earlier comments on Yerevan’s overtures to Ankara, Erdogan cited Azerbaijan’s demands for a formal Armenian recognition of Azerbaijani sovereignty over Nagorno-Karabakh.

Armenian opposition leaders have denounced what they see as Pashinyan’s secret overtures to Erdogan. They say that Ankara continues to make the establishment of diplomatic relations with Yerevan and the opening of the Turkish-Armenian border conditional on a Nagorno-Karabakh settlement favorable to Baku.

Turkey provided decisive military assistance to Azerbaijan during the six-week war in Karabakh stopped by a Russian-brokered ceasefire last November.