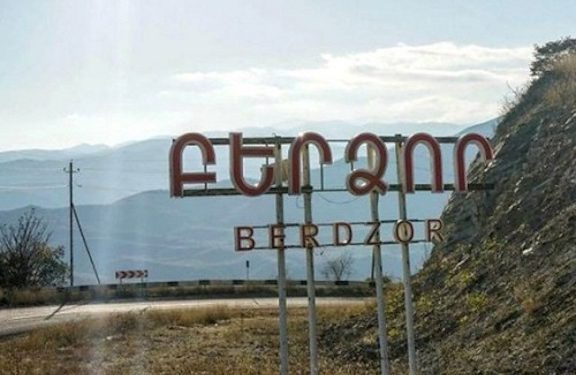 Berdzor is the lifeline to Artsakh from Armenia

The fate of villages in Artsakh, especially two in Berdzor (Lachin) hanged in the balance on Tuesday as Prime Minister Nikol Pashinyan made opaque remarks signaling that more Armenian territories might be conceded to Azerbaijan.

At current situation centers on roads that will bypass Berdzor, or Lachin. According to the November 9, 2020 statement signed by the leaders of Armenia, Azerbaijan and Russia, Artsakh will have a lifeline to Armenia through Berdzor. However, the stipulation is that new roads must be constructed that bypass the current Lachin corridor, as a portion of that territory is not occupied by Azerbaijan.

Azerbaijan signaled that it has fast tracked the construction of an almost 20-mile road, saying that the project is near completion. Armenia, on the other hand, is still in the planning stages of the project, according to Pashinyan, who said on Monday that Yerevan is awaiting assurances that Russian peacekeepers will monitor the area.
“Road construction must also be carried out in Armenia to reach such a solution. At this stage, we have already started work on the design. When there is a final understanding that we are achieving our goal, that is, we must have a faster and better way under the full control of Russian peacekeepers, yes, we will work toward such a solution,” he said.

But a more troubling statement by the prime minister has irked residents of Berdzor, who are insisting that they are staying put and no one can remove them from their homes.

During a virtual press conference on Monday, Pashinyan said that after the road bypassing Berdzor become operational, the settlements that fall outside of the Soviet-era Nagorno-Karabakh Autonomous Region, will fall under Azerbaijani control. Essentially, Pashinyan confirmed that several villages in Berdzor, among them Aghavno and Sus, will fall under Azerbaijani control.

Only after being asked about the fate of the residents of those villages did Pashinyan clarify by saying that the Armenian government will provide housing to potentially displaced Armenians of Berdzor, adding that Artsakh authorities were handling the issue of the Aghavno village.

“I think the problems of the residents of Aghavno village will be solved with the help of the Artsakh government. I cannot say about Sus, because I do not have that information at the moment,” said Pashinyan, adding that the matter will be settled based on the principle of whether the villages fall within or outside of the former Nagorno-Karabakh Autonomous Region,” he said.

Residents of the region are angry, mainly due to Pashinyan’s nonchalance and indifference toward these territories and their residents—a trait exhibited by the prime minister since the damning defeat Armenian suffered in the 2020 war.

Today, some 200 Armenian live in Aghavno. The head of the village, Andranik Chavushyan, told the RFE/RL Armenian Service on Tuesday the residents of the village not leave their homes under any circumstances.

He accused Pashinyan of not taking into consideration the desires of the residents and accused him of making empty promises when he promised housing to those soon to be displaced residents by saying that some residents who lost their homes during the were promised residences but never received them.