Yerevan Warns of Humanitarian Disaster in Artsakh During Visit to Brussels 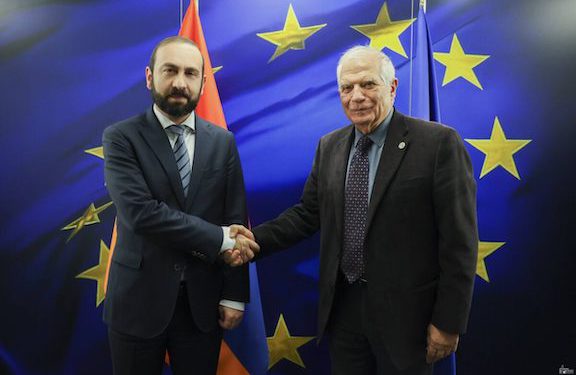 Armenia’s Foreign Minister Ararat Mirzoyan on Tuesday was in Brussels where he met with the European Union’s foreign affairs chief Josep Borrell, among other leaders, and emphasized the worsening humanitarian crisis in Artsakh as a result of the ongoing Azerbaijani blockade of the Lachin Corridor.

In a tweet following the meeting, Borrell emphasized the “need to avoid a humanitarian crisis,” adding that he and Mirzoyan discussed the blockade as well as the “security situation in the wider region” and “prospects for resuming peace talks” between Armenia and Azerbaijan.

Highlighting the November 9, 2020 agreement, Mirzoyan said Azerbaijan must immediately stop the Lachin Corridor blockade. He also emphasized the need for the international community to take “effective steps” to prevent Azerbaijan’s policy of ethnic cleansing in Artsakh.

Among the wider regional issues discussed was the deployment of the EU’s civilian mission, which was announced earlier this week, with Mirzoyan welcoming the initiative, according to a statement from the Armenian foreign ministry.

Mirzoyan stressed that Azerbaijan’s actions and rhetoric are undermining Armenia’s efforts to establish peace in the South Caucasus when he met with Toivo Klaar, the EU’s special representative to the South Caucasus, who had just returned from a visit to Armenia late last week.

Mirzoyan also told Klaar that the EU mission to Armenia will “contribute to ensuring security and stability in the region.”