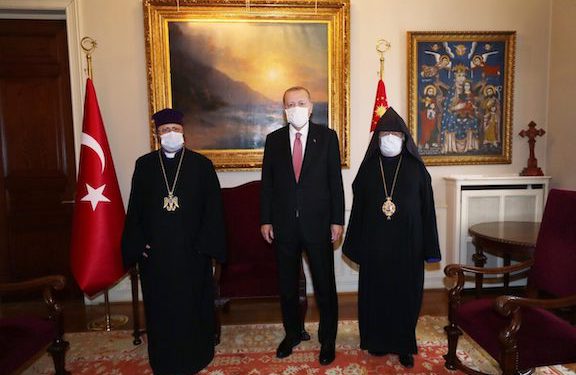 “The US president has made comments that are groundless and unfair,” Erdogan said in televised remarks, warning that they could have a “destructive impact” on Turkish-US ties.

According to Reuters, Erdogan called on Biden to immediately reverse his declaration that 1915 massacres of Armenians in the Ottoman Empire constituted genocide, a move he said was upsetting and diminished bilateral ties.

Meanwhile on Saturday Turkey’s foreign ministry summoned the U.S. ambassador in Ankara to protest Biden’s recognition of the Armenian Genocide On Saturday.

“The statement does not have legal ground in terms of international law and has hurt the Turkish people, opening a wound that’s hard to fix in our relations,” the ministry said.

The Turkish Foreign Ministry was quick to “denounce and reject” Biden’s announcement, which it said was “made under pressure of radical Armenian circles and anti-Turkey groups.”

“The nature of the events of 1915 does not change according to the current political motives of the politicians or domestic political considerations. Such an attitude serves only a vulgar distortion of history,” said Turkey’s foreign ministry.

“After more than a hundred years of this past suffering, instead of exerting sincere efforts to completely heal the wounds of the past and build the future together in our region, the US President’s statement will not yield any results other than polarizing the nations and hindering peace and stability in our region,” added the foreign ministry, saying Biden’s announcement “will open a deep wound that undermines our mutual trust and friendship.”

“We call on the US President to correct this grave mistake, which serves no purpose other than to satisfy certain political circles and to support the efforts aiming to establish a practice of peaceful coexistence in the region, especially among the Turkish and Armenian nations, instead of serving the agenda of those circles that try to foment enmity from history,” added the statement.

“There will be a reaction of different forms and kinds and degrees in the coming days and months,” Kalin told Reuters. “Everything that we conduct with the US will be under the spell of this very unfortunate statement,” he said.

Erdogan continued to deny the Armenian Genocide in a message sent to the Armenian Patriarch of Istanbul Sahak Mashalian on Saturday, saying Turkey is ready to enhance relations with Armenia “on the basis of good neighborhood and mutual respect.”

“I remember with respect the Ottoman Armenians, who lost their lives under the harsh conditions of the First World War, and offer my condolences to their grandchildren,” Erdogan said in the statement to Mashalian.

“We all are the members of the family of humanity regardless of our ethnic origin, religion, language or color. We have been living together in peace on these lands for centuries and feeling at peace under the shadow of our red crescent-star flag,” added Erdogan.

“I believe that building our identity solely upon the pains left by the past to our souls is also a grave injustice to new generations. It is time for us to lay bare that we as Turks and Armenians have reached the maturity of overcoming all obstacles together,” he added.