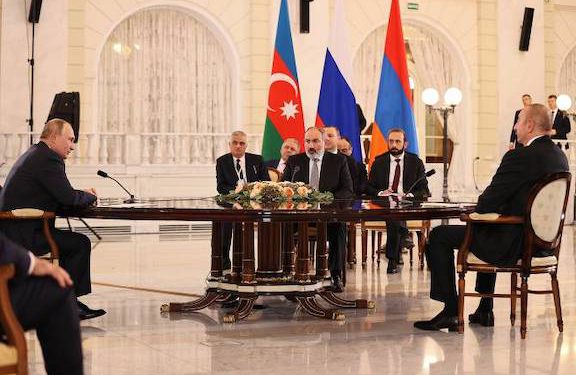 Prime Minister Nikol Pashinyan meets with presidents of Russia and Azerbaijan, Vladimir Putin and Ilham Aliyev in Sochi on Oct. 31

This proposal emanated from a meeting in Sochi on Monday between Pashinyan and the presidents of Russia and Azerbaijan, Vladimir Putin and Ilham Aliyev, after which an announcement was made reaffirming Armenia’s and Azerbaijan’s commitment to respect each other’s borders and sovereignty.

Pashinyan said that the approach to delay discussion of Karabakh status was in line with the government’s approach.

“You are aware that our Russian colleagues have stated that in their opinion the proper approach would be to delay the issue of the status of Nagorno Karabakh for an indefinite period of time. How is this explained? It is explained based on the fact that at the moment there is objectively no opportunity to find a status that will be mutually acceptable. Furthermore, it we must admit that this is not a new situation. To what extent is the policy of the government of Armenia in accordance with this vision? I must say that it fully and 100 percent acceptable,” Pashinyan said, speaking at a session of parliamentary budget commission.

“You have noticed that we have tried to put aside the word ‘status’ as an issue for a solution. Why? Precisely because of this vision. Because we agreed with our Russian colleagues that it is not worth attempting to resolve this issue because it will lead to an inevitable crisis,” Pashinyan added.

He said that there are three components to the Nagorno-Karabakh issue – security, rights and status of Armenians of Artsakh.

Pashinyan also said that during the Sochi meeting a step was taken toward implementing his government’s so-called “peace agenda.”

“Before that meeting there were some discussions in Armenia whether Armenia is moving on with the possible optimal option regarding the normalization of the Armenia-Azerbaijan relations and the settlement of the Nagorno Karabakh conflict. The talk was about to what extent the policy of the officials involved in the negotiations is in the interests of Armenia and Nagorno Karabakh in terms of content. I think that one of the most important nuances of the Sochi meeting was the answer to this question. That answer is not that it did not exist before Sochi, it’s just that the discussions around that issue became maximally public, and we can see publicly and compare to what extent our policy is in accordance with that vision and framework,” Pashinyan said.

He also said that the key factor that guarantees the rights and security of Armenians of Nagorno Karabakh is the presence of the Russian peacekeepers, as long as there are no reliable mechanisms and guarantees yet for ensuring the security and rights.

Pashinyan said that he proposed extending the mandate of the peacekeepers for an indefinite period, adding that while the meeting did not approve that approach, the issue is not on the agenda of talks.

He said that Yerevan’s proposal is to extend the mandate of the peacekeepers and to have them in Karabakh for the long run.

Armenia to Boost Defense Spending In 2023