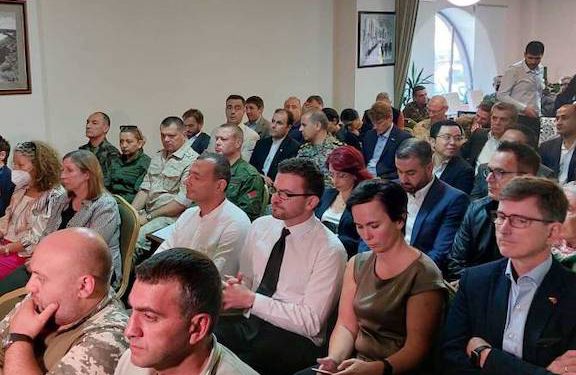 Armenia's foreign diplomatic corps was briefed about Azerbaijan's attacks in Jermuk on Sept. 16

Details of atrocities committed by Azerbaijani forces during their attack on Armenia this week were presented to Armenia’s foreign diplomatic corps, who met with the Army Chief of Staff Edward Asryan on Friday in Jermuk, the site of some of the heaviest shelling.

Among the examples Asryan recounted was the brutal mutilation of a female Armenian soldier who was captured by Azerbaijani forces. The Army chief said he would show a video of the attack to the diplomats.

“They committed atrocities in our combat positions against our servicemen, including women soldiers,” Asryan said. “I cannot find words to describe how they dismembered a female soldier, cut off her legs, fingers and stripped her naked. This is unheard of cruelty.”

A graphic video depicting the attack that Asryan described has been circulating on social media on Friday. Asbarez reviewed the video, but will not publish it due to its graphic nature and the fact its authenticity could not be corroborated.

The soldier was identified as Anush Apetyan, 36, a mother of three children was reportedly captured alive in Jermuk and then raped, tortured and dismembered by Azerbaijani soldiers. They put her severed fingers in her mouth and gouged out her eye.

Asryan told the diplomats that no military force, unit or soldier of any country has the right to commit such atrocities. He called it a gross violation of the international humanitarian law, accusing Azerbaijan of committing war crimes.

He assured that the Armenian Armed Forces will continue taking all measures to ensure the military security of the homeland.

During the briefing, the Army Chief of Staff said that surveillance footage indicated that 50 to 60-man Azerbaijani military group has pulled back from the northern part of Jermuk, in the Vayots Dzor Province.

He said that now only one Azerbaijani military team remained in Jermuk, 4.5 kilometers (around 2.7 miles) away from the city on a hilltop, adding that they have been surrounded by the Armenian Armed Forces.

“They were not able to reach the outskirts of Jermuk with their other units. Only one group is on the hill. And in terms of survival, if this adversary group does not get food or water supplies, they will have to deplete their resources in a few days and will have to leave. The group is surrounded by our detachments,” Asryan told the diplomats.

He said that the tactical situation in the area was stable, and asserted that the group eventually will withdraw.

“There will not be vehicle movement into our territory. There is none right now. They are unable to bring food or water and by losing their supplies this group will pull back and join their main detachments which are farther away from the outskirts of Jermuk,” he said.

Asryan explained that from the onset of the attack by Azerbaijan, shortly after midnight on Tuesday, the Armenian Armed Forces began their countermeasures. However, due to what he called “the superiority of the enemy’s units,” several combat positions were lost. These areas, he said, served as a base for the Azerbaijani forces to be able to infiltrate deep into Armenia’s defense area with hundreds of forces.

He said during the almost 48 hours of combat, Azerbaijani forces were able to advance 11 to 12 kilometers (6 to 7 miles) into Armenia’s sovereign territory. Asryan told the diplomats that the area has not shrunk to 4.5 kilometer (2.7 miles), signaling that Armenian forces were able to reclaim those areas.

Members of Armenia’s foreign diplomatic corps visited Jermuk and toured some of the areas where the heaviest fighting took place this. They were able to see first hand the extent of damage that was caused to civilian and municipal structures.

The ambassadors of the U.S., UK, France, Italy, EU, China, Argentina and Netherlands were among the group of envoys that included military attachés of other foreign embassies.

Putin Says Attack on Armenia ‘Has Nothing to Do’ with Karabakh

Fall Planting 2022: Planting a Forest of Hope in Armenia