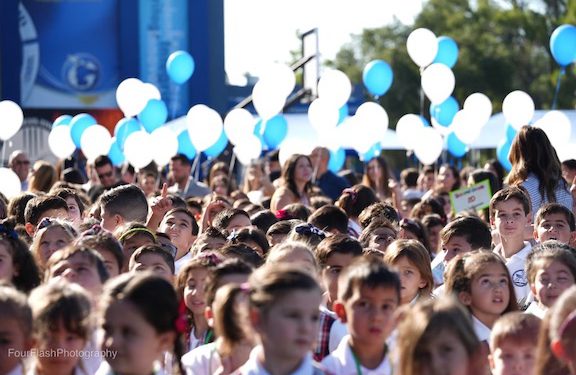 Elementary Western Armenian teacher Arpi Dabbaghian opened the ceremony with welcoming remarks, speaking about the joy and pride filled in parents’ and teachers’ hearts as they watch the happy faces of children returning to school. She also noted that in the last 48 years Chamlian Armenian School has become a little Armenia, where the minds and souls of future successful Armenian American generations are shaped.

Head of School, Dr. Talin P. Kargodorian directed her remarks to the students, reminding them of the school’s core values, and empowering them to work towards achieving Academic Excellence, to be inspired by Innovation, to uphold the collective Integrity, and to cherish their Armenian Heritage.

Dr. Kargodorian invited a procession of the youngest TK and Kindergarten students, led by their teachers, into the Ceremony. In longstanding tradition, the graduating 8th Grade class escorted the incoming 1st Grade students, passing on the torch of becoming future Chamlian Tigers.

In closing, Very Reverend Father Zareh Sarkissian followed the procession with a prayer to bless the school, its students, teachers and families for a successful, healthy and happy school year ahead.

Vahan and Anoush Chamlian Armenian School began with eight students in 1975 and today serves 700 students in Glendale and surrounding communities. Chamlian is a premier TK – 8th Grade school invested in the success of each student. Chamlian is one of twelve Armenian schools throughout California governed by the Board of Regents of the Western Prelacy of the Armenian Apostolic Church of America.