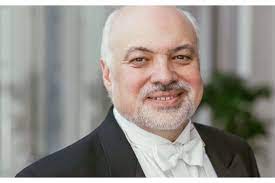 NEW YORK—New York City Opera (Michael Capasso, General Director) has announced the appointment of internationally acclaimed conductor and pianist Constantine Orbelian as the company’s Music Director and Principal Conductor. Maestro Orbelian will conduct his first NYCO production this summer when the company performs a newly created version of “Rigoletto” on Sunday, August 29 at the Phoenicia International Festival of the Voice in Kingston, New York, followed by an encore performance of the Verdi favorite on Friday, September 3 as part of Bryant Park’s annual Picnic Performance series.

“We are indeed very fortunate to welcome the world-renowned maestro, Constantine Orbelian to the New York City Opera Family,” commented Mr. Capasso. “Maestro Orbelian brings decades of international experience conducting opera’s greatest stars both in performance and on award-winning recordings and will offer the company and its audiences many world-class performances in the future. I have no doubt his skill and experience will be central to restoring City Opera to its place in the American and international Opera scenes.”

“I am thrilled to accept the position of Music Director and Principal Conductor of the venerable New York City Opera,” said Maestro Orbelian. “It is a great opportunity to help bring this historic, culturally significant musical institution back to life after a challenging time of Covid closures. We will give opera lovers the thrill of hearing extraordinary singers from across America and beyond. Staying true to the NYCO tradition, we will provide contemporary composers a great platform in which to premiere their works. We look forward to welcoming you, our opera-loving public, to our performances at Bryant Park and the Phoenicia International Festival of the Voice this summer and to announcing our next season of events and performances.”

New York City Opera will return to the Bryant Park Picnic Performance series this summer with four concerts beginning this month on Friday, June 18 with its annual “Pride in the Park” concert and culminating on Friday, September 3 with a fully staged, costumed and Orbelian-conducted production of “Rigoletto,” a newly created 90-minute version with narration written and performed by actor and playwright Bill Van Horn.

This winter, New York City Opera will produce, with National Yiddish Theatre Folksbiene, the world premiere of Ricky Ian Gordon and Michael Korie’s “The Garden of the Finzi-Continis,” opening in January at the Edward J. Safra Hall at the Museum of Jewish Heritage – A Living Memorial to the Holocaust in downtown Manhattan, guest-conducted by Maestro James Lowe. Other upcoming 2022 productions include the New York premiere of Anthony Davis and Richard Wesley’s Pulitzer Prize-winning opera “The Central Park Five.”

Four-time Grammy-nominated conductor Constantine Orbelian has been called “the singer’s dream collaborator” by “Opera News,” which hailed him for conducting vocal repertoire “with the sensitivity of a lieder pianist.” He has toured and recorded with some of the world’s greatest singers, such as American stars Renée Fleming, Sondra Radvanovsky and Lawrence Brownlee, and with the great Dmitri Hvorostovsky and other renowned Russian singers in European, North American, Russian and Asian music centers.

Maestro Orbelian’s accomplishments include being Music Director of the Moscow Chamber Orchestra and the Philharmonia of Russia, founder of the annual Palaces of St. Petersburg International Music Festival, Chief Conductor of the Kaunas City Symphony Orchestra in Lithuania, and Artistic Director of the State Academic Opera and Ballet Theater in Yerevan, Armenia. Among his concert and televised appearances are collaborations with Hvorostovsky, Renée Fleming, Anna Netrebko, Elīna Garanča and Van Cliburn, including the legendary pianist’s farewell performance.

Born in San Francisco to Russian and Armenian émigrés parents, Maestro Orbelian made his per-forming debut as a piano prodigy with the San Francisco Symphony at the age of 11. After graduating from Juilliard in New York, he embarked on a career as a piano virtuoso that included appearances with major symphony orchestras throughout the U.S., U.K., Europe and Russia.

The first American to become music director of an ensemble in Russia, he was awarded the coveted title “Honored Artist of Russia” in 2004 in recognition of his efforts championing Russian-American cultural exchange. In 2012 the Russian Consulate in San Francisco awarded the maestro the Russian Order of Friendship Medal, joining such luminaries as Cliburn and Riccardo Muti in being so honored. In 2001 Maestro Orbelian was awarded the Ellis Island Medal of Honor, given to immigrants, or children of immigrants, who have made outstanding contributions to the United States.

Maestro Orbelian has recorded over 60 CDs for the DELOS Label and has additional DVDs and CDs which have been released on Decca, Deutsche Gramophone, Chandos, Philips and Warner la-bels.

Since its founding in 1943 by Mayor Fiorello La Guardia as “The People’s Opera,” New York City Opera has been a critical part of the city’s cultural life. During its history, New York City Opera launched the careers of dozens of major artists and presented engaging productions of both mainstream and unusual operas alongside commissions and regional premieres. The result was a uniquely American opera company of international stature.

For more than seven decades, New York City Opera has maintained a distinct identity, adhering to its unique mission: affordable ticket prices, a devotion to American works, English-language performances, the promotion of up-and-coming American singers, and seasons of accessible, vibrant and compelling productions intended to introduce new audiences to the art form.

Stars who launched their careers at New York City Opera include Plácido Domingo, Catherine Malfitano, Sherrill Milnes, Samuel Ramey, Beverly Sills, Tatiana Troyanos, Carol Vaness, and Shirley Verrett, among dozens of other great artists. New York City Opera has a long history of inclusion and diversity. It was the first major opera company to feature African-American singers in leading roles (Todd Duncan as Tonio in “Pagliacci,” 1945; Camilla Williams in the title role in “Madama Butterfly,” 1946); the first to produce a new work by an African-American composer (William Grant Still, “Troubled Island,” 1949); and the first to have an African-American conductor lead its orchestra (Everett Lee, 1955).

A revitalized City Opera re-opened in January 2016 with “Tosca,” the opera that originally launched the company in 1944. Outstanding productions during the four years since then include: the world premieres of Iain Bell and Mark Campbell’s “Stonewall,” which NYCO commissioned and developed, and legendary director Harold Prince’s new production of Bernstein’s “Candide”; Puccini’s beloved “La Fanciulla del West”; and the New York premiere of Daniel Catán’s “Florencia en el Amazonas” — the first in its “Ópera en Español” series.

Subsequent “Ópera en Español” productions include the New York premiere of the world’s first mariachi opera, José “Pepe” Martinez’s “Cruzar la Cara de la Luna,” Literes’s “Los Elementos,” and Piazzolla’s “María de Buenos Aires.” In addition to the world premiere of “Stonewall,” the productions in NYCO’s Pride Initiative, which produces an LGBTQ-themed work each June during Pride Month, include the New York premiere of Péter Eötvös’s “Angels in America” and the American premiere of Charles Wuorinen’s “Brokeback Mountain.” New York City Opera has presented such talents as Anna Caterina Antonacci and Aprile Millo in concert, as well as its own 75th Anniversary Concert in Bryant Park, one in a series of the many concerts and staged productions that it presents each year as part of the Park’s summer performance series.

New York City Opera continues its legacy with main stage performances at Jazz at Lincoln Center’s Rose Theater and with revitalized outreach and education programs at venues throughout the city, designed to welcome and inspire a new generation of opera audiences. City Opera’s acclaimed summer series in Bryant Park brings free performances to thousands of New Yorkers and visitors every year.