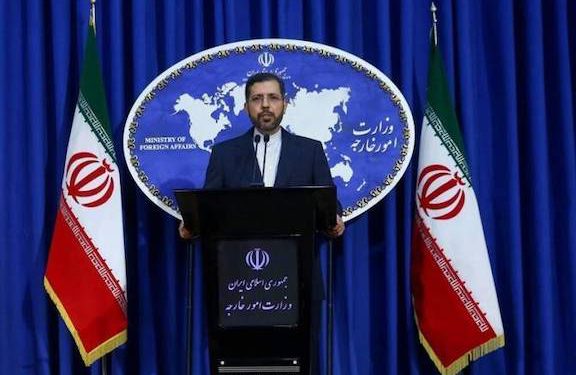 Iran on Monday had a terse warning for Azerbaijan’s President Ilham Aliyev who on Friday accused Armenia and Iran of drug trafficking for the past 30 years using what he called Azerbaijan’s territory.

“After restoring its 130-kilometer border with Iran, which was under Armenian control for 30 years, Azerbaijan stopped the illegal trafficking of narcotics from Iran to Armenia and on to Europe through Azerbaijan’s Jebrail district,” Aliyev said during the CIS summit.

“Armenia and Iran conspired to use Azerbaijan’s occupied territories to traffic drugs to Europe,” Aliyev charged, without producing evidence to back up his claims.

Khatibzadeh said that Baku is sticking to “baseless statements” despite privately sending “positive messages” to Tehran. The Islamic Republic will respond to that accordingly, he warned.

Iran’s National Security Council Secretary Ali Shamkhani also criticized Aliyev and Baku’s recent tenor toward Tehran, advising Aliyev to be careful to not fall into “the trap set by the Zionist regime.”

In a Twitter post, Shamkhani called Aliyev’s remarks not constructive and accused the Azerbaijani leader of ignoring principles and ethnical norms of neighborly relations.

“I want to point out that we have been cooperating with Iran’s law-enforcement bodies very closely and very productively fighting against drug trafficking,” said Pashinyan on Friday.