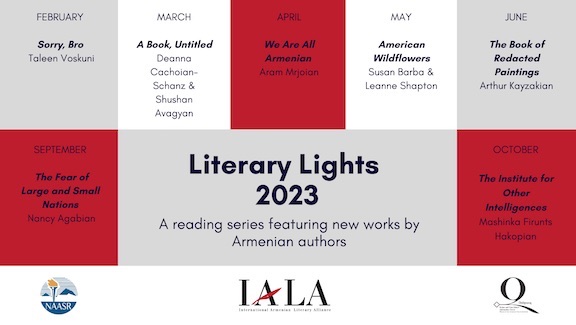 The International Armenian Literary Alliance, the National Association for Armenian Studies and Research, and the Krikor and Clara Zohrab Information Center will host “Literary Lights,” a monthly reading series in 2023 featuring new works of literature by Armenian authors. Each event—held from February to December in a mixed online and in-person format—will feature a writer, editor or translator reading from their work, followed by a discussion with an interviewer and audience members. Audience members are invited to read along with the series.

The reading series will begin in February with a virtual event on Taleen Voskuni’s “Sorry, Bro,” a queer romantic comedy in which an Armenian-American woman rediscovers her roots and embraces who she really is. Voskuni, an Armenian-American writer based in the San Francisco Bay Area, will be in discussion with JP Der Boghossian, writer, founder of the Queer Armenian Library, and host of “This Queer Book Saved My Life.”

In March, an in-person event will be held at the Zohrab Information Center in New York on “A Book, Untitled” by Shushan Avagyan, translated by Deanna Cachoian-Schanz. The book is about an imagined encounter between two early twentieth-century feminist writers, Zabel Yesayan and Shushanik Kurghinian, juxtaposed with a conversation between the author and a friend. Avagyan is a translator, author, and the co-founder of the queer-fem Queering Yerevan Collective in Armenia’s capital. Deanna Cachoian-Schanz is a translator working in the geographies of Armenia, Turkey, and their diasporas, at the intersection of critical, feminist and queer theory, archive and critical race studies. Cachoian-Schanz and Avagyan will engage in conversation with  translator, scholar, and teacher of the Armenian language, Lisa Gulesserian.

In April, the series will highlight “We Are All Armenian: Voices from the Diaspora,”edited by Aram Mrjoian, with both in-person and virtual events. “We Are All Armenian” is a groundbreaking collection of personal essays exploring the multilayered realities of life in the Armenian diaspora. Mrjoian, who will moderate both events, is an author, editor-at-large at the Chicago Review of Books, and an associate fiction editor at Guernica. Click here for more information.

In May, the organizations will host Susan Barba, editor of “American Wildflowers: A Literary Field Guide.” This anthology is filled with classic and contemporary poems and essays inspired by wildflowers—perfect for writers, artists, and botanists alike. Barba is the author of the poetry collections “Fair Sun” (2017) and “geode” (2020), and an editor at “New York Review Books” based in Cambridge, Massachusetts. Barba will discuss the anthology with Jesse Arlen, a writer, researcher and Director of the Zohrab Information Center. Click here for more information.

In June, the organizations will present Arthur Kayzakian’s “The Book of Redacted Paintings,” erasure-ekphrasis poems about a boy in search of his father’s painting, which may or may not exist. The collection won the inaugural 2021 Black Lawrence Immigrant Writing Series award and was selected as a finalist for the 2021 Philip Levine Prize for Poetry. Kayzakian will also discuss his forthcoming chapbook, “My Burning City,” which integrates the author’s personal history during the Iranian Revolution, his family’s migration to the United States, and the state of living in America as a displaced, bilingual Iranian-Armenian. Kayzakian is an author, teacher, IALA Poetry Chair and Board Member, and a Contributing Editor at “Poetry International.”

The series will resume in September with an event on Nancy Agabian’s “The Fear of Large and Small Nations,” a contemporary story of an abusive relationship between a queer couple, set between the Armenian homeland and diaspora. The novel was a finalist for the PEN/Bellwether Prize for Socially Engaged Fiction. An activist, teacher and IALA Board Member, Agabian is the author of “Princess Freak” (2000), the first collection of poems and performance texts by a bisexual Armenian-American, and “Me as Her Again: True Stories of an Armenian Daughter” (2008), finalist for a Lambda Literary Award in LGBT Nonfiction and shortlisted for a William Saroyan International Prize.

The reading series will conclude in October with an event on Mashinka Firunts Hakopian’s “The Institute for Other Intelligences,” which chronicles the transcription of a symposium at a fictive institute where machine intelligences convene annually for lectures and training on algorithmic justice. Hakopian is a Yerevan-born, Glendale-based writer, artist, researcher, teacher, IALA Advisory Board Member, and a Contributing Editor for “Art Papers” and “ASAP/J.”

Three of the titles listed above are currently available for purchase online, including: “A Book, Untitled” by Shushan Avagyan, “The Book of Redacted Paintings,” and Mashinka Firunts Hakopian’s “The Institute for Other Intelligences.”

Center for Truth and Justice Calls on U.S. Leaders to Condemn Azerbaijan's Blockade of Artsakh