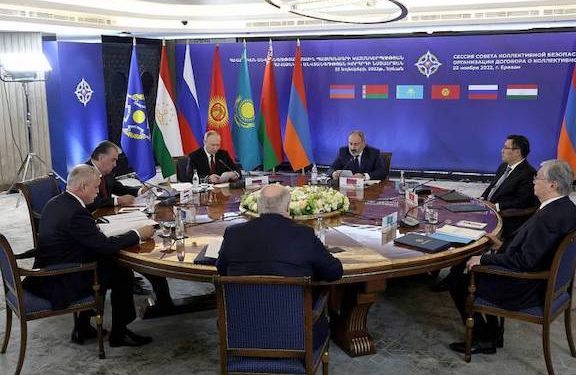 CSTO leaders gather in Yerevan for an annual summit on Nov. 23

In discussing why Yerevan did not sign a statement that would have provided military assistance to Armenia by the Collective Security Treaty Organization, Prime Minister Nikol Pashinyan told parliament on Wednesday that the absence of a clear rebuke by the group would have meant that Armenia was accepting the current status quo of having Azerbaijani forces inside Armenia’s sovereign territory.

Pashinyan explained that Yerevan’s primary expectation was for the CSTO to properly identify the entity responsible for the unrest—Azerbaijan. The second objective was to have the group provide a political assessment of the situation, which arose when Azerbaijani forces attacked Armenia and invaded its territory.

“We expect an assessment of what happened and, within this context, it was emphasized that there was a proposal for assistance… It is not clear what kind of assistance was being offered, and accepting that assistance without clear assessments would mean accepting the status quo established at our borders,” Pashinyan explained.

Pashinyan referred to the results of the October 6 meeting in Prague, where he and President Ilham Aliyev of Azerbaijan agreed to recognize each other’s territorial integrity based on the Alma-Ata Declaration of 1991. Only after that, it was possible to send a European Union observation mission to Armenia, because the borders of Armenia were clear.

“With all this, have the security challenges around Armenia decreased? No, they have not decreased and perhaps they have even increased. However, based on our estimations if these documents were accepted as they are, the threats would not decrease, on the contrary, they would continue to increase,” said Pashinyan about the CSTO statement.

Foreign Minister Ararat Mirzoyan also addressed lawmakers on Wednesday and briefed the legislature about the current status of the CSTO document.

“There is one expectation: to clearly record what happened, and that is the invasion of the sovereign territory of the Republic of Armenia by Azerbaijan, the targeting of civilian infrastructures,” said Mirzoyan.

“The CSTO is a military-political alliance, where the states have agreed to protect each other’s territorial integrity, to protect it through diplomatic and political means, but, if necessary, also through military means. And here we expect that our CSTO allies will have this spirit when adopting decisions,” Mirzoyan added.

“In the discussed decision, among other measures, the issue of providing military-technical assistance to Armenia was also considered. But, I repeat, for us, the issue of political assessment is a priority,” said Mirzoyan. “After our allies have acknowledged that there was an invasion of the territory of Armenia, then we can consider the remaining measures as well: resolving the issue politically, that is, ensuring the withdrawal of Azerbaijani troops, military-technical assistance.”