Pashinyan Criticizes CSTO, Which Says it Has ‘Taken Note’ of Armenia’s Appeal 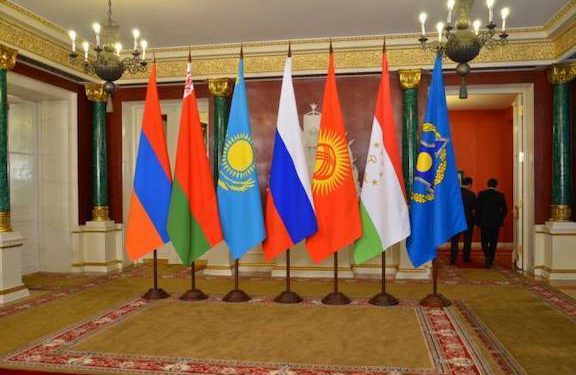 As Acting Prime Minister Nikol Pashinyan on Wednesday was criticizing the Collective Security Treaty Organization, to which Armenia officially appealed for help after Azerbaijani forces breached Armenia’s border, the Russia-led security body announced that it had “taken note” of Armenia’s appeal.

Zainetdinov added that that during a coordination meeting of the CSTO’s chairmen of the defense and security committees on Tuesday, the body’s Deputy Secretary General Valery Semerikov said that the situation on the Armenian-Azerbaijani border requires urgent measures, primarily of a political and diplomatic nature, as well as implementation of demarcation and delimitation on this section of the state border.

On May 14, Pashinyan appealed to the current chairman of the CSTO Collective Security Council, President Emomali Rahmon of Tajikistan, with a request to immediately activate the mechanism of emergency consultations in order to coordinate the positions of the CSTO member-states and take measures to eliminate the emerging “threat to security and territorial integrity” in Syunik.

Based on Semerikov’s statement, it appears that the CSTO, of which Armenia is a member, is opting to address Azerbaijan’s border incursion through diplomatic avenues—a clear echoing of Moscow’s position on the matter.

Speaking at the National Assembly on Wednesday, Pashinyan said that Armenia did not exclude the possibility of applying to the United Nations Security Council, if the CSTO mechanisms fail to help resolve the border standoff.

Pashinyan also criticized the CSTO for not siding with Armenia publicly on the matter and said Yerevan is not satisfied with the “pace” of the CSTO’s response.

“At this moment we are not satisfied with the pace of the CSTO actions, but we will continue to consistently work… with our partners,” Pashinyan said.

Citing a security agreement between Russia and Armenia, Pashinyan also appealed to Russia for help in the Azerbaijani border breach issue on May 14.

During his remarks in parliament on Wednesday, Pashinyan insisted that the Russians are committed to defending Armenia against foreign aggression in line the CSTO statutes and bilateral Russian-Armenian treaties. He said Russian President Vladimir Putin has repeatedly assured him that “Armenia’s borders are a red line for Russia.”

“Russia’s position was, is and remains that the border of the Republic of Armenia is a red line for the Russian Federation. And yes, it’s a sad fact that Azerbaijan has crossed that red line. And I consider it impossible that Russia will not carry out its contractual obligations,” said Pashinyan referring to the Russia-Armenian security agreement.

Earlier this week, Russia’s foreign minister touted the close ties between Moscow and Yerevan, citing the number of meetings between the two countries’ top leaders as an example. Lavrov did not address Armenia’s appeal for help to Russia or the CSTO.

Pashinyan also told parliament on Wednesday that in addition to setting Azerbaijan’s complete withdrawal from Armenia’s sovereign territory as a precondition, he has also demanded the release of all Armenian political prisoners and captives being held in Baku.

This comes as a May 31 deadline looms for the creation of a committee to delineate and demarcate the border of Armenia and Azerbaijan as set forth by a plan proposed by Russia, the details of which were leaked last week forcing Pashinyan to confirm that he had agreed to signing yet another secret agreement that could jeopardize Armenia’s sovereignty.