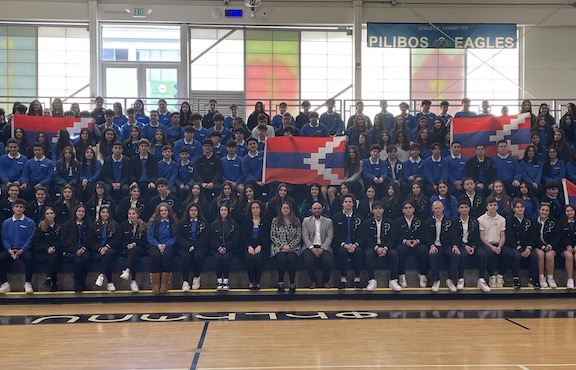 On the 37th day of Azerbaijan’s illegal blockade of the Lachin corridor — the single, life-preserving route that connects Armenia with Artsakh — representatives of the Armenian National Committee of America Western Region met with Rose & Alex Pilibos Armenian School’s high school students to brief them about the ongoing humanitarian crisis and mobilize them to participate in the #SaveArtsakh campaign urging the Biden Administration to pressure Azerbaijan to end its illegal, genocidal blockade of Artsakh.

On December 12, 2022, Azerbaijani “eco-activists” inspired by pseudo concerns of environmental protection, blockaded the only road connecting Artsakh with the outside world. While demonstrators claimed to have peaceful intentions, the closure, now exceeding the one-month mark, has caused massive devastation for Armenian families in Artsakh. Entirely wiped out grocery stores have resulted in food insecurity and area-wide shortages which are threatening malnutrition and starvation. A lack of medication and medical resources from Armenia is leaving newborn babies without formula and the elderly and injured without life-saving supplies. Azerbaijan has now cut the gas supply for the second time since the beginning of the blockade, robbing civilians of the ability to heat their homes in the bitter cold of winter.

5. A representative of the ANCA-WR discusses the ongoing crisis in Artsakh with Pilibos School’s high school students

The Aliyev Regime’s actions directly violate a host of international human rights and humanitarian law, including the use of “starvation of civilians as a method of warfare” which is prohibited under the Geneva Conventions. As such, ANCA-Western Region and host of Armenian and non-Armenian organizations have been calling upon President Biden to impose sanctions against members of the Aliyev regime under the Global Magnitsky Act, for their gross violations of international humanitarian law since the 2020 Nagorno Karabakh Conflict.

“The illegal blockade of Artsakh is part of Azerbaijan’s genocidal plan to ethnically cleanse Armenians from the region, and as the leader of the free world, President Biden must take tangible steps to protect innocent civilians and force Aliyev to end this cruel and inhumane blockade,” said ANCA-WR Media and Communications Coordinator, Anna Gasparyan. “As Armenian Americans, we call on the Biden Administration to use its influence now to resolve this looming humanitarian crisis.”

In an effort to educate and organize advocacy efforts by deeply-concerned Armenian-American youth, the ANCA-Western Region provided students with information to engage in online advocacy by visiting the #SaveArtsakh campaign website set up by the Pan-Armenian Council of the Western Region to call and email The White House demanding the President to do the following

More than 100 high school students attending the Pilibos school assembly were reinvigorated by the ANCA-WR presentation and actively participate in advocacy for Artsakh and the Armenian Cause.