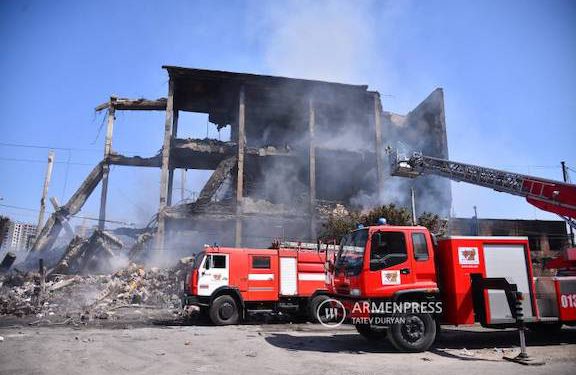 YEREVAN (Azatutyun.am)—The Russian embassy in Yerevan has sent a note to Armenia’s Foreign Ministry over what it described as “false accusations” related to the recent explosion and fire at a Yerevan market in which at least 16 people were killed and dozens others were injured.

“We are outraged by the cynical fake reports in the local media, containing blasphemous and false accusations against Russian structures in connection with the August 14 tragedy at the Surmalu shopping center,” the embassy said in a statement released on Wednesday.

“We consider this as a direct provocation by the political forces behind such insinuations aimed at undermining Russian-Armenian allied relations. We expect the Armenian authorities to take steps aimed at preventing such unfriendly manifestations, including necessary public comments,” it added, without naming any political party or group or referring to any particular media report.

The Russian embassy stressed that through the Russian-Armenian Humanitarian Response Center “the Russian side has been involved in the work on the elimination of the consequences of the tragedy from the very first minute.”

The Armenian Foreign Ministry or other officials have not yet publicly responded to the note sent the Russian embassy.

Vahan Hunanyan, a spokesman for the Armenian Foreign Ministry, told RFE/RL’s Armenian Service that “if there is a comment on the statement of the Russian embassy, it will be published, and journalists will get to know about it.”

Although the Russian embassy did not name any political party or group in Armenia that made accusations against Russia over the Surmalu explosion, it may have referred to the extra-parliamentary National Democratic Axis (NDA) party, whose senior member Hayk Martirosyan in one of his interviews claimed that there were suspicions that the explosion was actually a terrorist act.

A supporter of the NDA in a Facebook post also claimed, referring to Armenia’s current position in the processes over Nagorno-Karabakh, that “the Russians will blow up half of Armenia with fireworks until it capitulates.”

Garegin Chukaszyan, a representative of the Sasna Tsrer group who is also a member of the NDA board, however, said that he would not believe that the Russian embassy meant their political force unless there was a specification from a state-run Russian news agency.

On August 16, the NDA issued a statement not directly concerning the Surmalu incident. In that statement the party said that “false alerts about bombs planted in state and public facilities pursue a clear goal of sowing panic and creating chaos.” The NDA went on to say that it believed that the actions were “being guided and managed from one center, the colonizer, whose goal is to create panic ahead of a new concession.”

Chukaszyan confirmed that Sasna Tsrer and the NDA believe that foreign forces are behind these actions that he claimed are aimed at diverting public attention from upcoming “ethnic-cleansing” against Armenians in Nagorno-Karabakh.

The Sasna Tsrer representative referred to fact that Armenian residents of two villages situated along the Lachin corridor, which links the region to Armenia and is controlled by Russian peacekeepers deployed in the area under the terms of a Moscow-brokered ceasefire agreement between Armenia and Azerbaijan, have been told to leave their homes until the end of the month. The villages are to be handed over to Azerbaijan as part of the ceasefire agreement.

August 17 and 18 are declared days of national mourning for the victims of the Surmalu market explosion in Armenia.

Russian President Vladimir Putin was among the world leaders who responded to the news of the deadly explosion and fire at the Yerevan market by sending his condolences to Armenian Prime Minister Nikol Pashinyan.