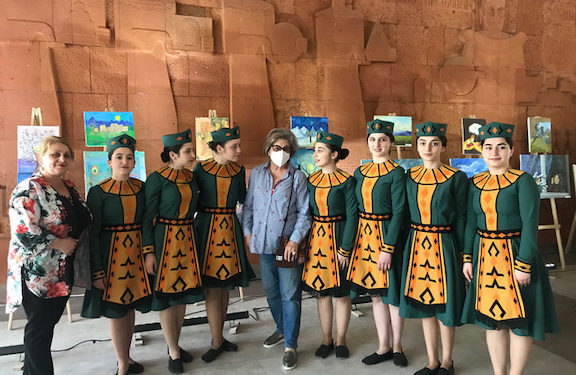 Catherine Yesayan with the dance group and their teacher

This past year, as if the COVID-19 pandemic was not enough, the year 2020 brought to us, Armenians, other harrowing experiences. The disastrous August 4 explosion at the Port of Beirut dealt a major blow to Lebanese Armenians and later on, September 27, Azerbaijan launched military air attacks in Artsakh. During the six weeks of fierce fighting thousands of people were reported killed and many more were displaced from their homes.

On March 22, I was on an airplane flying to Armenia and all these events were weighing on my mind. I was thinking of how I could get firsthand information and put into writing the horrific sufferings that Armenians endured in this calamitous year, when an opportunity presented itself.

On my flight, I met Nayiri Nahabedian, a member of the city of Glendale’s Board of Education. She was flying to Yerevan with a friendship message to the displaced families of Artsakh. She was bringing letters from students attending a school in Glendale to the youngsters at a sister-school in Artsakh. Each envelope contained a personal note from the students and a $20 bill.

Nahabedian invited me to attend an event on April 1st, at the Tekeyan youth center in Yerevan. Kids from war-torn Artsakh would be there, and she would distribute the envelopes among them. On that day, I took a taxi and arrived at the center, right before the event started. Between 50 and 60 students and a few teachers from that school were in attendance. At the event, I was introduced to Anahit Kosakyan, the principal of the #1 school in Berdzor, a city in Artsakh. In Armenia, the schools have numbers as names, and there were only two schools in Berdzor. Mrs. Kosakyan was principal of the #1 school.

As with any school event in Armenia, the children performed songs and offered eloquent declamations. The many talents of Armenian kids never ceases to amaze me. Nahabedian spoke to the youngsters, telling them that she knows how difficult it must be to leave their homes, their friends, and to start a new life. She reminisced about her own move at around age 11 from Beirut to the United States. She said, “Although there’s no comparison of the nature of the move, I missed my school and my friends.” After many talks and performances, Nahabedian distributed the letters that she had brought for the students.

Before I go any further, let me tell you that I was so impressed to see how well-dressed the kids were and how dedicated their teachers were. You could not tell that they had left their homes at a spur of the moment with what they had on their back.

After the event, I had the chance to chat with Kosakyan, the principal of the school. She told me about the school, the city, and how most families left their homes when they heard the first air strike on Sunday, September 27. She said that although the residents of Berdzor had been warned about the severity of the attacks and were advised to collect their belongings and leave the city, she and her family, including her 83-year-old mother, decided to stay in their home. This was mainly because her 30-year-old son, who had volunteered to join the Armenian defense, was injured and was getting rehabilitation at the hospital.

They finally left on October 19, at which time the war had progressed, and it felt like they couldn’t continue to stay. She said, “While I was in Berdzor, I tried to collect as many documents from the school as I could.”  After the ceasefire on November 10, she returned to Berdzor to pick up some more items from school.

Let me take a step back and tell you a piece of history.

The Modern-day Armenia and Azerbaijan, in 1920s, became part of the Soviet Union. Nagorno-Karabkh, or Artsakh, was an ethnic-majority Armenian region, however, the Soviets, by the order of Stalin, had handed control of the area to the Azerbaijani authorities. Prior to this recent bloodshed, there was another war in Artsakh, which lasted six years, from 1988 to 1994. It was between Armenia and Azerbaijan, which ended with a victory for Armenia. The Armenian forces regained Artsakh, the territory which originally belonged to them, and were able to push the Azeri population out of the area. So, the conflict between Azerbaijan and Armenia that had rested dormant for more than 25 years flared up again in 2020. And this time Azerbaijan reclaimed much of the land that they had lost in the war of 1990s.

Kosakyan explained that, today, the city of Berdzor is under the occupation of Azerbaijan. The city was established in 1994 after the first war of Artsakh. She said that in 1998 she was living in Yerevan and heard that there was an opening for a teacher in Berdzor. She applied and was hired. Then afterwards in later years, she became the principal of the school. The school had 220 students from first grade to 12th. Today, Kosakyan lives at her son’s apartment in Yerevan. She said that, a few months ago, with the support of some benevolent foundations, she was able to establish a non-profit under the name of “Moving Towards Kashatagh Support Group” (Kashatagh being the region in which Berdzor is situated.) Her office in Yerevan is trying to give different kinds of help to people that were displaced from Artsakh.

At the event, I also met Hasmik Danielyan, who was the English teacher at the school.  She said that she and her husband stayed in Berdzor until November 6. Both were helping the soldiers with food and different necessities. Today, Danielyan volunteers at an office in Yerevan where they feed displaced people from Artsakh and deliver assistance to wounded and fallen soldier’s families. They also assist displaced people in registering for different kinds of available help.

I believe that we, Armenians, are a resilient and a surviving nation. This impression is amplified when I see the remarkable strides that people of Artsakh have taken to return to a normal life.

Kosakyan invited me to yet another event organized by the School of the Arts in Berdzor. There, I met Tatev Babayan, the drawing and painting teacher for the school. She said that on September 27, on a Sunday, when the first attack happened, she was home. Coincidently, she had recently received her driver’s permit, and she had bought a car, but she had never driven it.  She said, “I piled up my family and drove to Goris.” Goris is a town about one hour away from Berdzor in Armenia. Babayan said that after they left their home, she returned to Berdzor a few more times to pick up some items from her home as well as to bring the student’s art works.

At the event, all around the hall, there were a multitude of easels displaying student’s paintings. It bogles my mind to see how in an organized fashion in the midst of a war, people could save so much. There were a few hundred people in attendance. The event was opened by a few words by the principal of the art school. Then there were group dances, poems, and songs.

I also met the school’s dance teacher at the event. I congratulated her for the great job she did in teaching the girls the Armenian Shourj Bar (group dance.) She was proud of the girls who performed so well. Her 17-year-old daughter was among the girls. She said the dance costumes were donated by an Armenian organization from the United States. She was quite happy, as if there were no trepidations in her life— which there are. Her two sons, 17 and 13 years in age, have mental problems and she’s managing her life on a shoestring budget.

To end my report, I should add that, since the outbreak of the war, many organizations have provided all kinds of humanitarian aid to the families who have had to flee the region. In my next column I will talk about some of these forms of assistance.

As Azerbaijan Steps Up Advance on Syunik, Yerevan Turns to CSTO for ‘Rapid Response’