The Armenian Saga Continues in Brazil 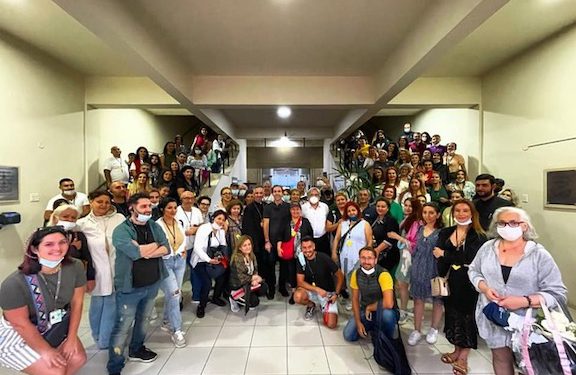 The Vardan Travel tour group at the Dourian Armenian school

The idea of traveling to Brazil came to me during my trip to Armenia, where I learned that Vardan Travel was taking a group to Brazil. After several years of visiting different countries and writing about their respective Armenian communities, it was time for me to explore Brazil.

I signed up for the excursion during my visit to Armenia, then returned home to the United States. A month later, I headed to Brazil to join the group in São Paulo, the country’s most populous city.

Before I continue to tell you about the Armenians of Brazil, I will provide a brief history of the country.

Brazil is the “longest” and fifth largest country in the world. The land now known as Brazil was inhabited by several tribal groups before the arrival of a Portuguese explorer named Pedro Alvares who, in 1500, claimed the area for the Portuguese Empire.

Brazil remained a colony of Portugal until 1815, at which time the colony was elevated to the rank of kingdom under a constitutional monarchy. Brazil’s current constitution was framed in 1988, and it is now defined as a Democratic Federal Republic.

The Armenian community of Brazil, after Argentina, is the second largest in Latin America. It is estimated that there are between 50 to 70,000 Armenians living in Brazil. They have maintained a strong presence in the city of São Paulo, as is evidenced by the two churches—a Catholic and an Apostolic one, a few Armenian community centers, and a radio station. There is also a metro station named “Armenia.”

Members of the Brazilian Armenian community have been involved in the country’s political realm, and there are even a few well-known artists and actors who represent Armenia’s ethnic contribution to Brazil’s cultural landscape.

One of the earliest Armenian immigrants to Brazil was Rizkallah Jorge Tahan (1868 to 1949) who arrived to Brazil in 1895. He was fleeing the massacres of Armenians in the Ottoman Empire. Back home, Rizkallah had learned the trade of copper smelting, a skill which he brought to this new country.

The story goes that Rizkallah made a fortune through melting copper. His success lies in the fact that he discovered a market niche that was untapped in Brazil. He would melt copper and manufacture items.

Riskallah’s business evolved into manufacturing of bathroom items, such as siphons, pipes, valves for water tanks, etc. Three years after his arrival, at the age of 20, Rizkallah opened “Casa da Boia,” a hardware store in downtown São Paulo, for building materials. The building still exists and is considered a historical landmark. In 2018, the store celebrated its 120th anniversary. The Casa da Boia is still a family business—now run by Mário Rizkallah, his grandson.

Rizkallah later became an accomplished builder. He made his mark by erecting at least six architecturally significant buildings in the center of São Paulo. Riskallah supported the Armenian community in many ways, such as providing aid for new immigrants.

When I research about potential Armenian communities to visit, I try to find members of that locality to meet and learn about the challenges, opportunities, history, and culture unique to that area. Prior to landing in Brazil, I connected with Sarkis Karamekian on Facebook, and he arranged for someone to pick me up from the airport.

I arrived in São Paulo, at five in the morning. After being picked up by the ride Sarkis had arranged, I was at the hotel around 6:30 a.m., where I had asked for an early check-in. I had enough time to have breakfast and sleep to regain my energy. Having started my trip a day before at 10:30 a.m. (L.A. time), I was quite exhausted. I had first flown from LAX to Miami, and later taken a red eye from Miami to São Paulo. Altogether, I had been on the road for 16 hours with no chance to sleep.

Later in the afternoon, Sarkis met me at the hotel where we had the opportunity to sit down and chat. Sarkis was born in São Paulo to Armenian parents. His father was an immigrant from Syria, but his mother was born in Brazil. Since he was a young boy, he had patriotic sentiments toward Armenia.

“At the age of 20, I wanted to fight for Armenia in the first war of Armenia and Artsakh,” said Sarkis. Today, he is actively involved in several Armenian causes. In 2006, he started an Armenian radio station. He has also created a foundation to support Syrian Armenian children who have recently arrived in São Paulo — about 300 kids. His heart is so close to the issues that affect the Armenian community both in the Middle East and in South America. To list all his good deeds, I would need to write a separate column exclusively about his work.

Our group of 80 people from Yerevan arrived at the hotel around 7 p.m., with two buses—a double decker and a regular one. The following day was a Sunday. Our itinerary started with a visit to Paulista Avenue, which is the financial and cultural heart of São Paulo. The headquarters of several financial and cultural institutions are located on this fabled street. Paulista Avenue is also known to be the first paved street in São Paulo, having been paved in 1909.

On Sundays, Paulista Avenue is closed to traffic and people can walk its 1.5-mile length. There are towering buildings displaying stunning and unique architecturally designed buildings on both sides of the street. It was a true pleasure to have the opportunity to walk that street.

Later, we visited two more sites, and then the tour continued to the Armenian Apostolic Church of St. George in São Paulo. The church was built by Rizkallah in 1948. It was one of the most ornate Armenian churches I’ve visited in the Diaspora.

The spacious interior of the church was decorated with exquisite wall paintings and stained-glass windows. The Diocese welcomed us with a special liturgy, followed by a dinner. We visited the Armenian Genocide memorial, which was right across from the church.

Adjacent to the church was the Armenian National Dourian school, which was founded 94 years ago. Today the school has 120 students from kindergarten to 12th grade. We visited some of the classrooms, which were truly impressive.

After our visit to the church, we boarded our buses and went to the Armenian Club to have dinner. The Armenian Club is equipped with tennis courts and a swimming pool and accommodates other sports, as well. The club has about 200 members.

The following day – on Monday morning – we boarded our buses to depart for the spectacular Rio De Janeiro. Perhaps the most breathtaking city in the whole world, where urban planning blends with the splendid views of the hills emerging from the ocean and the beaches.

In Rio De Janeiro there were no Armenian traces to follow. However, we experienced the many attractions and sightseeing options available there. The tour had also organized a few excursions to areas outside of the city, such as a coffee plantation, swimming with fish and a trip to the historic city of Petropolis.

I must add that our stay at the Sheraton Hotel of Rio De Janeiro was a true delight. It happened that our hotel was the only hotel in Rio that is right next to the beach. It was very convenient. We took the elevators down and the beach and the swimming pools were right there. In all other hotels of Rio, you must cross a street to get to the beach.

This was indeed a wonderful trip.