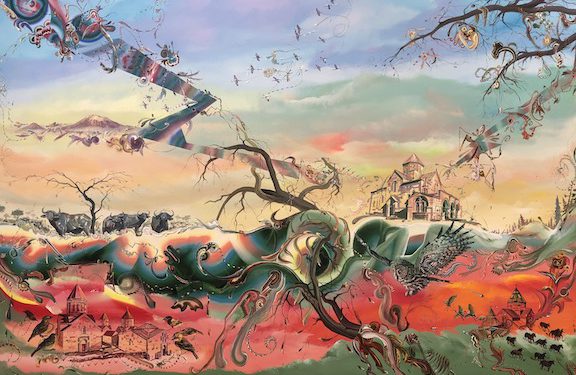 LOS ANGELES—Tufenkian Fine Arts will present “Bazmaket…,” a two-person group show featuring artworks by Gegam Kacherian and a selection of artworks by Gegam Kacherian in collaboration with Los Angeles-based painter Chris Trueman. The exhibition will run from Friday, August 27, and will be on view through Sunday, October 10. This will be Kacherian’s second show with the gallery and Chris Trueman’s first time exhibiting at the gallery.

The exhibition will offer nearly twenty works between the two artists presented in two different groupings: a new body of work produced by Kacherian painted in oil on canvas and recent works done in collaboration between Kacherian and Trueman. Both series of works expand upon the artists’ exploration of representation through abstraction.

Kacherian’s new paintings build upon his earlier works in which canvases are populated with visages from the artist’s past, delicately weaving together surrealist, dreamlike imagery with prismatic, atmospheric colors. Kacherian’s kaleidoscopic pieces resist the quick take and allow us to actively engage with each canvas’ unique visual elements. With paintings that feature exotic animals and human figures, defiantly shifting landscapes, and meticulously rendered floating cities, Kacherian masterfully combines the abstract and representational to create a unique visual language.

For the artist collaboration, Trueman first began by applying acrylic paint to the surface of the canvas via brush and squeegee, a process which allows the artist to mimic the dynamic of rendering both positive and negative space simultaneously much in the same way as digital and photographic mediums. Once this process was complete, Kacherian would then incorporate his phantasmagoric symbols and figures which seem to aimlessly float across the canvas.

Kacherian’s new body of work was produced in direct response to the 2020 Nagorno Karabakh conflict between Azerbaijan and Armenia. Kacherian’s paintings reflect a sense of loss, sorrow, and lament at the outbreak of the war. Largely produced when he left for a meditative retreat, these paintings were the pauses in Kacherian’s life, the bazmaket, in which the artist was able to reflect on his feelings of aggravation and hopelessness.

After Covid-Related Delays, Board of Regents Hosts School-Wide Conference