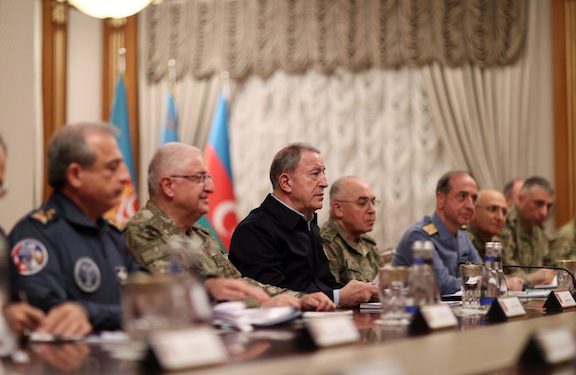 Turkey’s Defense Minister Hulusi Akar said Tuesday that if Yerevan does not provide the so-called “Zangezur Corridor” to Azerbaijan, Armenia will receive a serious blow—or a “fraternal fist,” as he put it.

Turkish media reported that Akar, who is in Azerbaijan to oversee joint military exercises on the border with Iran, spoke of the “brotherhood” between Turkey and Azerbaijan, saying that the two countries will collectively deal with threats to either one.

“Any threat or provocation against Turkey or Azerbaijan, regardless of its source, will be recognized as a common challenge to our brotherly countries,” Akar said, addressing participants of the joint Turkish-Azerbaijani exercises, dubbed as the “Fraternal Fist.”

The Turkish minister indirectly confirmed Ankara’s participation in Azerbaijan’s aggression against Armenia and Artsakh, saying, “The world community witnessed our unity during 44-day war, which resulted in liberation of historical lands of Azerbaijan from long-lasting Armenian occupation.”  Akar called for “closing the page of contradictions and hatred in the region and to begin building a common future based on respect for international law.”

“It is our sincere wish that Armenia will hold the hand of peace extended by Turkey and Azerbaijan. We support sincere efforts to establish lasting peace between Azerbaijan and Armenia,” he added.

“It is our most sincere wish to re-establish the railway and road connections in the region, especially the opening of the ‘Zangezur corridor,’ to start economic activities, and to ensure a comprehensive normalization throughout the region, including the relations between Azerbaijan-Armenia and Turkey-Armenia,” Akar said of Azerbaijan’s plan to open a land corridor through Armenia.