U.S. Has ‘Significant Evidence’ of Azerbaijan’s Attack on Armenia 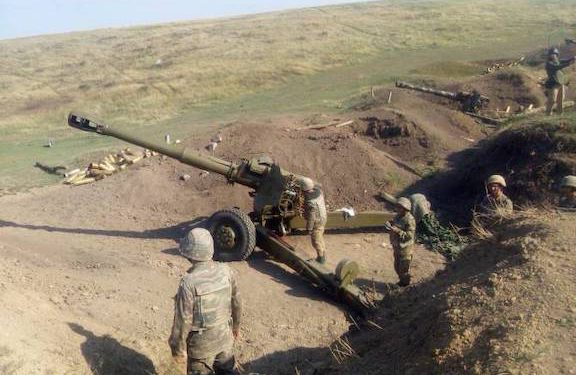 Armenian soldiers man positions at the border with Azerbaijan

The United States “has seen sufficient evidence that Azerbaijan is shelling inside Armenia and significant damage to Armenian infrastructure,” State Department spokesperson Ned Price said at a press briefing.

“Well, as we said in the readout of the Secretary’s calls that took place overnight, he urged President Aliyev to cease hostilities immediately, to disengage military forces, and to work to resolve all outstanding issues between Armenia and Azerbaijan through negotiations that are peaceful and diplomacy that is constructive,” added Price.

The State Department spokesperson was referencing a call between Secretary of State Antony Blinken and President Ilham Aliyev of Azerbaijan on Tuesday, when the top American diplomat urged the Azerbaijani leader to “cease hostilities” and promoted dialogue and diplomacy to overcome the crisis.

“Most important for us is that both of these parties commit to a cessation of hostilities and commit to a broader de-escalation,” Price reiterated.

Shortly after midnight on Tuesday Azerbaijan launched a large-scale attack along its border with Armenia, shelling civilian and military targets in Gegharkunik, Syunik and Vayots Dzor provinces. Armenia officials put the death toll at 105, with more than 80 injuries reported.

The state department spokesperson also called on Russia to use its influence in the region to quell the current situation.

“There is no question that Russia has outsized influence with both Azerbaijan and Armenia and the United States have called on Russia and continues to call on Russia to use that influence and to use that leverage in a way that helps to achieve a cessation of hostilities, and more broadly a de-escalation of those tensions,” Price said at a press briefing.

Speaking to reporters in Indiana on Tuesday, Blinken also called on Russia to use its influence in the region to stabilize the situation, after voicing concern that Moscow could “muddy the waters” between Armenia and Azerbaijan, Reuters reported.

He said that the United States has always been concerned that Russia may “add fuel to the fire,” in order to deflect attention from the Ukraine conflict. He added, however, that Russia can also use its influence in the region to stabilize the situation.