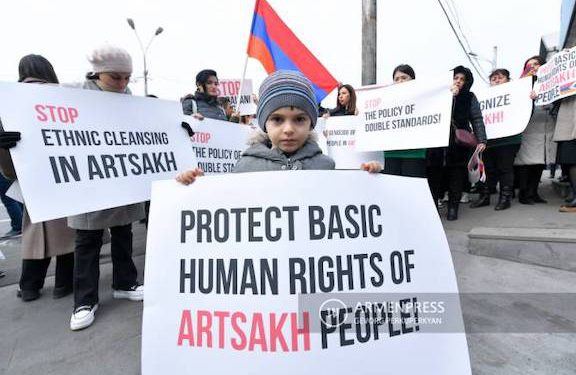 A child hold a placard during a nationwide rally in Stepanakert on Dec. 25

United Nations International Children’s Emergency Fund—UNICEF—warned of the grave impact of the ongoing blockade of the Lachin Corridor on the children of Artsakh.

“Children are being impacted by the virtual closure of access to Nagorno Karabakh via the Lachin corridor. The longer the situation persists, the more children will experience the lack of basic food items, while access to many of the essential services they need for their survival, healthy growth and wellbeing will become more challenging. Many children have also been deprived of parental care as they have been separated from their parents or legal guardians,” UNICEF said in a statement.

“UNICEF echoes the UN Secretary-General’s appeal to ensure freedom and security of movement along the Lachin corridor, in line with previous agreements. This is critical to ensure that children in Nagorno Karabakh are protected and that humanitarian actors can safely and quickly reach those in need. UNICEF continues to seek dialogue and work in coordination with all actors to gain access to children in these areas,” the statement added.

Through the mediation of the International Committee of the Red Cross, three more patients hospitalized at the Stepanakert Hospital were transported to various hospitals in Armenia, Artsakh’s health ministry said Wednesday.

This is third ICRC-mediated patient transfer since Azerbaijan began the blockade of Artsakh on December 12.

The right to life, health, freedom of movement, education and other fundamental rights of 120,000 people are at risk in Artsakh, the country’s Human Rights Defender Gegham Stepanyan said as the Azeri blockade of Artsakh entered the 17th day.

Artsakh authorities approved a bill on imposing restrictions on restaurants amid food shortages and energy savings resulting from the Azerbaijani blockade.

Artsakh State Minister Ruben Vardanyan told officials at a meeting that he had met with businessmen in the sector to discuss the restrictions. Vardanyan welcomed the mutual understanding and support of the businessmen, some of whom had already cancelled mass events in their venues.

Vardanyan also said that he was briefed that the cash supplies in Artsakh were sufficient. However due to the existing situation organizations and individuals have begun withdrawing more cash from ATMs and are saving it, which is impacting the cash turnover volumes.